The Stand Up and Don’t Be Counted rally saw students, leaders, businesses and politicians join forces to protest against the Government’s net migration target 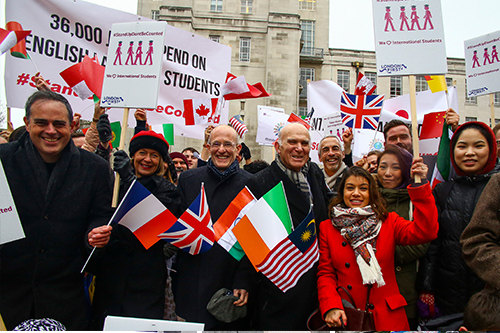 participated in a rally to support the removal of international students from the Government’s net migration target. Sir Paul joined influential figures including Sir Vince Cable, MP for Twickenham and Leader of the Liberal Democrats; Tulip Siddiq, MP for Hampstead and Kilburn; and Jonathan Bartley, co-leader of The Green Party; along with business leaders, students and academics.

The Mayor of London, Sadiq Khan, has also supported the campaign by signing a letter to accompany the rally, along with the NUS and CEOs of major UK businesses.

We take great pride in attracting a diverse range of students from across the globe and we value the huge contribution international students make to our institution and to London. City’s staff and students make us one of the most international universities in the world.

I fully support campaigns to remove students from the net migration target and was proud to join the Stand Up and Don’t Be Counted rally. It is important that we make sure international students are welcomed as a valued part of university and economic life.