Deanna Taylor, a PhD researcher working in the Crabb Lab at City, University of London has won the prestigious George Giles Postgraduate Research Prize from the College of Optometrists for her research into visual disability in dry age-related macular degeneration (AMD). 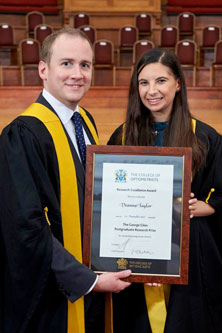 The award was one of seven given by the College as they recognised the achievements of some of the leading researchers in the field of optometry at its annual Diploma Ceremony in Central Hall Westminster in London.

Deanna – who is approaching the end of her PhD, supervised by Professor David Crabb and Dr Alison Binns – was awarded the prize for her research which demonstrated that there is a disproportionately-low focus on dry AMD amongst published studies. It has also looked at the impact of AMD on real-world activities of daily living, and should help to ensure that much-needed treatments in the process of development are evaluated against the most useful outcomes for patients, rather than only arbitrary or theoretical measures of improvement.

Speaking about the award, Deanna said:

“I am thrilled and honoured to have received this award, and am very grateful to the College of Optometrists. It was fantastic to celebrate at the Diploma Ceremony with so many people at different stages of their careers. I hope that the award will help to raise the profile of research into AMD.”

Speaking at the event, College President, Dr Mary-Ann Sherratt MCOptom said: “This ceremony is a great opportunity for us to take the time to honour those who are contributing to the evidence base with our awards for Research Excellence.”