Matthew Caruana Galizia: 'We want to make the price of killing a journalist higher than it already is'

“I never had another life. I always considered it to be normal,” confesses Matthew Caruana Galizia when talking about what it was like to be part of the family of Malta’s most well-known journalist, Daphne Caruana Galizia.

“When I was nine, my parents made up a story for me that our door caught fire when they forgot to put out the candles in front of it. When I went to school in the morning, other kids told me the truth about what happened, because it all was in the news, that someone had thrown petrol all over it and set it on fire.”

Matthew says facing pressure like this was common for his family: “When my mother was murdered, it was not a surprise for us. It was a deep shock, but not a surprise.”

With journalism like the Panama Papers leaks, the work of investigative journalists has become extremely dangerous--especially in regard to exposing corruption. As a former staff member of global investigative nonprofit International Consortium of Investigative Journalists (ICIJ) Matthew had several messages to share with us Mundus Journalism students, many of whom will step up into the profession soon. Here is the Top-5 of them.

“If you feel like journalism is hard to do and you want to give up, don’t give up! It’s not the time to give up,” Matthew says in the introduction to his talk. The industry needs more reporters to help cover the leaks on financial crimes that are flooding newsrooms.

Matthew mentioned that in the last two years of his mother’s life she struggled to cope with all the information she was given by the sources that trusted her. At the same time, Daphne Caruana Galizia was almost the only journalist in Malta to be brave enough to expose the corruption within the government. After her death her work needs to be continued. 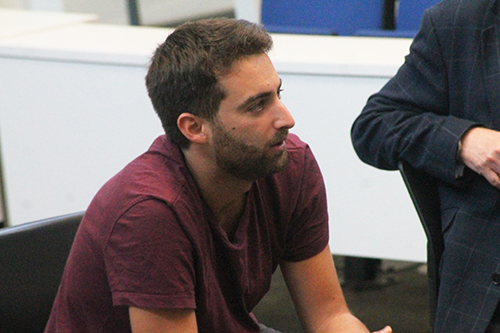 2) Don’t Let Anyone Bully You

“What was the main lesson your mother taught you?” a student asked Matthew. “Don’t let anyone bully you,” was the answer.

Matthew’s mother constantly got threats because of her work as an investigative journalist. And yet, she never stopped doing what she thought was right. The aim of the bullies is to stop you. If you stop, they win.

After Daphne Caruana Galizia was murdered a group of 45 journalists all over the world decided to continue her work. They were the first journalists to work under the umbrella of a new organisation called ‘Forbidden Stories’.

‘The Daphne Project’ is Forbidden Stories’ first major collaboration in their work to keep the stories of murdered journalists alive. They say: “You can kill a storyteller, but you can’t kill a story.”

Large news organisations like The Guardian, Reuters, Le Monde, Suddeutsche Zeitung and Organized Crime and Corruption Reporting Project (OCCRP) have joined the initiative and keep on covering Daphne’s stories on smuggling, ‘golden passports’ and others. But not every big news outlet is willing to participate.

“It’s a shame that an organisation like BBC did not join the project. Although they must be interested as they have lost reporters too. It would make sense for them,” Matthew points out.

“My brothers and I did not take part in The Daphne Project. Of course, we were sources for them. And they are doing a great job,” says Matthew, in praise of the initiative. “We want to make the price of killing a journalist higher than it already is.”

According to Matthew, The Daphne Project can help prevent the further murders.

4) Covering corruption can be more dangerous than covering conflict

When Matthew applied for the Mundus Journalism programme, he had three specialisation choices. One of them was the ‘War and Conflict’ programme taught in Swansea. As he recalls at the talk, his family was against this option. “It’s too dangerous,” they said.

However, sometimes journalists face physical threats far from the frontlines. Reporting financial crimes can be more dangerous than conflict coverage.

5) The world is changing very rapidly

At ICIJ Matthew worked as a developer as well as a journalist. He started programming when he was a teenager. It was a way for him to make some money. Back then computer science was not taught in schools, and Matthew’s skills were not as conventional as they are now.

However, after completing his education at City, University of London, he could not find a job. “I applied for so many jobs. And I was getting rejection after rejection,” Matthew says.

Then one of the News21 fellowship placements at UC Berkeley became free. Matthew immediately emailed the university: “Can you give this place to me instead? At least I can develop your website.” And they accepted him.

After that the Financial Times was looking for an IT specialist. And that is where his serious journalism career started, says Matthew. The world is changing. You have to adapt and be prepared to take on new skills.