The Centre for Food Policy at City, University of London has hosted the UK launch of the 2018 Global Nutrition Report.

Professor Corinna Hawkes, who is Director of the centre and co-chair of the report, said new figures showed malnutrition was causing more ill-health around the world than anything else.

A third of reproductive-age women are anaemic, while 39 per cent of the world’s adults are overweight or obese and each year around 20 million babies are born underweight.

Professor Hawkes was joined at the UK launch by speakers including Alistair Burt MP, Minister of State for International 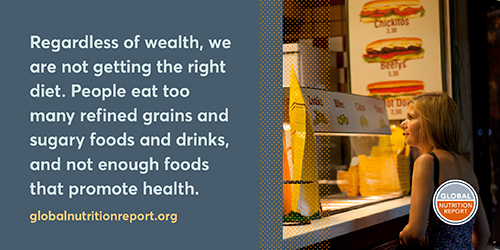 She said: “The figures call for immediate action. Malnutrition is responsible for more ill-health than any other cause.

"The health consequences of overweight and obesity contribute to an estimated four million deaths, while undernutrition explains around 45 per cent of deaths among children under five.

Now in its fifth edition, the Global Nutrition Report is the world’s most comprehensive report on nutrition and highlights the worrying prevalence and universality of malnutrition in all its forms.

The 2018 report was launched at an international event in Bangkok, Thailand, before the UK launch at City, which was that latest in the Centre for Food Policy’s Food Thinkers seminar series.

According to the report, slow progress on malnutrition is impacting the social and economic development of countries. It is estimated that malnutrition in all its forms could cost society up to US$3.5 trillion per year, with overweight and obesity alone costing US$500 billion per year. 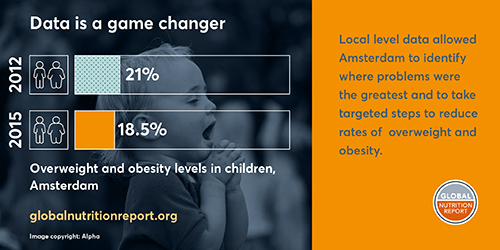 Dr Jessica Fanzo of Johns Hopkins University, co-chair of the report and a speaker at the City event, said: “While malnutrition is holding back human development everywhere, costing billions of dollars a year, we are now in a position to fight it.

"From policies such as sugar taxes, to new data that enables us to understand what people are eating and how we can best target interventions, the global community now has the recipes that work.”

Significant steps are being made to address malnutrition, according to the report. Globally, stunting among children under five years of age has fallen from 32.6 per cent in 2000 to 22.2 per cent in 2017.

There has been a slight decrease in underweight women since 2000, from 11.6 per cent to 9.7 per cent in 2016. Yet, while there has been progress, it has been slow and patchy.

The 2018 assessment of progress against nine targets reveals only 94 of 194 countries are on track for at least one of the nine nutrition targets assessed.

This means that most countries are significantly off-track on meeting all nine targets:

“This paradigm shift – food systems that contribute to prevent malnutrition in all its forms – will be critical for children’s growth and development, the growth of national economies, and the development of nations.”