Migration on the agenda at WC2 Symposium

City staff and students travelled to Canada for the fourth WC2 Symposium.

This year’s symposium was held at Ryerson University, and saw 16 members of staff and students from City make the trip with discussion focussing on the topic of migration using Canada as a Case study. 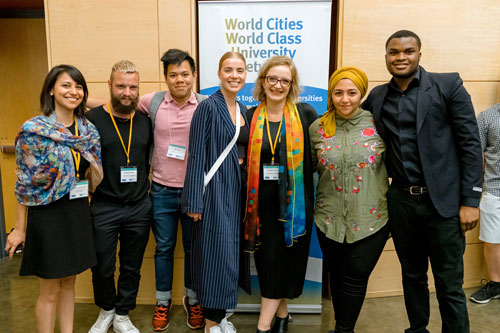 Speakers included Canadian writer, John Ralston Saul, CC OONT and The Honourable Ratna Omidvar, CM OONT, who discussed how Toronto has become one of the most multicultural cities in the world.

The WC2 Network was founded by City in 2010 and brings together top universities to address cultural, environmental and political issues affecting world cities.

Recently RMIT in Melbourne, Australia, joined the network, which now has members in six continents.

Professor Stanton Newman, Vice-President (International) said: “The Toronto WC2 Symposium provided an ideal setting to consider the network’s six thematic groups and a valuable opportunity for staff and students from around the world to work collectively.

“The overarching theme of the symposium was migration and attendees were able to hear about research on this important topic. The network is reviewing ways of developing and increasing research amongst members.

“We look forward to the next Symposium which will be hosted at Peter the Great St Petersburg Polytechnic University.”