Through a soon-to-be published article in Communications Biology, researchers from the Department of Mechanical Engineering & Aeronautics at City, University of London will demonstrate the physical mechanism employed by peregrine falcons to perform highly complex flight maneuvers at full speed during swoops from high altitudes to attack their prey.

The article's authors are led by Research Chair in Nature-Inspired Sensing and Flow Control for Sustainable Transport, Professor Christoph Bruecker. 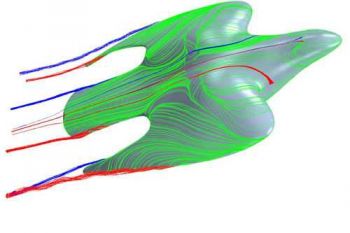 The image at right shows the evolution and passage of the vortical structures over the bird from the CFD simulation. The path of these vortices can be tracked by following each of the corresponding streamlines.