George Wigmore speaks to a Cass academic and an Engineering alumnus about their remarkable achievements in two of the world’s most gruelling, long-distance endurance races.

Imagine running in an oven wearing an 8kg rucksack while somebody throws sand at you and all there is to drink is bath-temperature water from a plastic bottle.”

For Dr Nick Motson, a Senior Lecturer in Finance at Cass Business School, this was how he spent six days in April 2016 as he ran the equivalent of six consecutive marathons through the Sahara, self-supported, as he attempted the world-renowned Marathon Des Sables.

The summer of 2016 was also spent in a similar way by Dr Neil Phillips (who recently obtained his PhD in Geotechnical and Geoenvironmental Engineering from City) as he finished second in the gruelling Transcontinental Race, riding 4,000 kilometres (2,485 miles) through 12 countries from Belgium to Turkey in just under ten days completely self-supported to finish second. 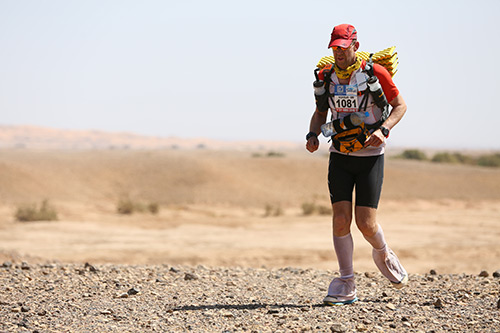 For Nick, the start of his journey began with a bet over Christmas in 2003 between a few colleagues. Little did Nick know at the time that it would lead to running 156 miles through the Moroccan desert 13 years later.“At the time I was working at a US bank as head of a trading desk, tipping the scales at 118kg, drinking too much, smoking and eating junk food. As a desk we had a bet as to who could lose the biggest proportion of their body weight between New Year and Easter and I managed to lose 20 per cent (24kg) by cutting out the junk and starting to jog; I honestly couldn’t call it running.”

Having won the bet, Nick’s boss then bet him that he couldn’t run the London marathon the following year in less than four-and-a-half hours. Nick won the bet again.

In the summer of 2015 a friend told me he had a slot for the Marathon des Sables in April 2016, which planted a seed. I’d just lost a close friend after a short battle with pancreatic cancer so decided to enter and take part in the race in his memory while trying to raise money for Pancreatic Cancer UK.

With the race signed up for, the main issue soon became about time and fitting in training around busy work and home life.

“I have three kids and a one-and-a-half-hour commute from home to the office so my biggest pressure is time,” says Nick. “From November until March I was running in the region of 50-65 miles per week, which meant finding 7.5 to 10 hours each week to train while minimising the impact on my family and work.” To help find time, Nick started combining his training with his commute, getting off the train earlier and running into Cass.

For Neil, who has a long history of bike racing, the Transcontinental was more of a natural progression but it was also a struggle to fit everything in around work, studies and life. He says:

I have been cycling my whole life, racing mountain bikes as a teenager, before a hiatus during my undergraduate studies. Moving to London rekindled my love for cycling as it was the easiest and most enjoyable way I found of getting around the city. Miles increased and I started road racing but had a desire to do some really big rides and push myself. I came across the first Transcontinental race and it sparked something in my mind to give it a go.

Starting on the cobbled streets of Belgium at night, the race began with a huge effort for Neil as he covered 634km (394 miles) in a day from Belgium to the centre of France to reach the first checkpoint, before setting off for the next one in Switzerland and the Alps.

Wearing shoes with special sand- gators to keep out the blister-inducing grains and a cap to protect his head and neck from the blazing sun, for  Nick the race started well. Even with a fully laden pack stuffed with food, water and the equipment needed for  the race, he was smoothly covering  between 35km and 41km each day.  “I was comfortably in the top half of  the field and getting into a routine of  eating, drinking plenty and making  sure I took my salt tablets. Though the  conditions were taking their toll on  my tent mates, high temperatures,  high winds and low humidity were a cocktail that left runners at significant risk of dehydration. In fact, my original tent of eight was reduced to six after day one, four after day two and three after day three as people dropped out.”

Then day four happened. Running the longest stage of the race, Nick had 52 miles to run within a 34-hour time limit. With a steep climb forming a choke point, Nick and the other runners were forced to wait in the blazing midday sun. The result, was that Nick got overheated, developed heatstroke and started vomiting, requiring a 3.5 litre IV drip that night to aid rehydration. But despite the setbacks, he still managed to keep going. To help survive the long days, dehydration and risk of losing salt and vital electrolytes, Nick also developed some interesting food habits during the race.

“As it turns out, the food you like at home might not be so appealing when it’s 40 degrees outside and my favourite foods turned out to be Peperami, cashew nuts and vanilla milkshake which sounds like an awful combination but somehow just hit the spot. It turned out that hydration was my biggest challenge; the water is rationed and, being 6ft 4in, I obviously needed more than somebody smaller.”

For Neil, a challenging moment came towards the end of a race, even though he was in second place, when freak weather struck as the race entered Macedonia. He says:

A distinct low was entering Macedonia from Kosovo. I was hit by a generational storm that cut my day short and was one of the scariest moments to be on a bike while trying to find refuge. Twenty-one people lost their lives in Skopje that night due to flash floods and waking to the sight of cars washed in to ditches opened my eyes to what could happen. 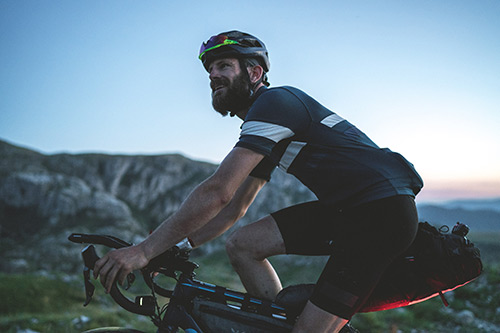 That dark day was followed however by the sheer adrenaline rush of approaching the end. “Reaching the finish, after battling 50km/h headwinds all morning and being awake for 36 hours, I had a tailwind for the final 30km and made sure I left all my energy reserves on the road. The adrenaline that develops when knowing it’s a short distance until it’s all over and you have practically completed something so incredible is unbelievable. I averaged speeds people would be happy with on fresh legs let alone after 3,700km and not sleeping for 700km.”

Astonishingly, Neil finished the race  in 9 days, 17 hours and 42 minutes. Despite the dehydration and challenges of running through the Sahara, Nick also completed the race and ended up 716th overall.

So would they do it all again? While Neil aims to focus on domestic racing this year, Nick has other plans.

“After finishing the race I sent an email to the people who sponsored me and said: ‘If I ever suggest doing this race again you have my permission to kick me where it hurts numerous times until I remember how broken I am at this moment’ and I promised my family I would take a year off before taking on any more challenges. It would appear the memories of how broken I was have faded fast because I have entered the Marathon des Sables again for 2018 with the aim of completing it without medical assistance this time.”

After all, while the pain is fleeting, the memories, adventures and intense sense of satisfaction will last forever.

A keen cyclist himself, George Wigmore is a Senior Communications Officer at City, University of London. He has also written for The Guardian, The Observer and the BBC.