Prize was awarded to Arjan Keuken for research into spatial vision

A City, University of London PhD student has won a best paper prize at the international European Association of Vision and Eye Research (EVER) 2017 conference in Nice, France. 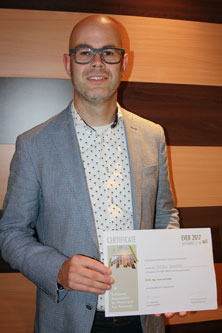 Specifically awarded to Arjan Keuken in the Age, Vision and Retina session, the new research will help to establish the normal range limits for spatial vision across different ages and light levels. These limits will enable optometrists to separate the normal effects of aging from those caused by early stage disease.

Spatial vision is arguably the most important aspect of our visual performance as it enables us to see fine detail over a range of light levels. How well we see is usually quantified by measuring the smallest high contrast letters one can read, but also by measuring the threshold that faint fine detail can be discerned. The latter is known as functional contrast sensitivity, a measure of contrast threshold for small objects.

Provisional results from the study found a gradual decrease in visual sharpness and functional contrast sensitivity after the age of 40. At lower light levels increased variability between participants was also seen.

Once completed, the project will have established age-corrected, normal limits for spatial vision in relation to ambient lighting levels. As well as enabling clinicians to separate the normal effects of aging from those caused by early stage disease, the findings from this research project will represent a first step in the development of robust techniques for assessing spatial vision with applications in working environments and in optometry/ophthalmology.  The study was supervised by Professor John Barbur and Dr Ahalya Subramanian in the Division of Optometry and Visual Science at City.

A part-time PhD student at City and a lecturer in clinical optometry at the University of Applied Sciences in Utrecht, The Netherlands, Arjan said:

“The award for best paper for my presentation at the EVER conference is a wonderful appreciation for the work we have done so far. At the University Outpatient Eye Clinics I continue to see patients and supervise students in their first patient care experience. Many patients in clinical practice have visual complains at lower light levels. What motivates me most is that the final results of this translational research project can be applied in clinical practice. It may even be useful in the early detection of retinal disease.”