The Banality of Crimes against Migrants

The City Law School's Dr Ioannis Kalpouzos argues that the International Criminal Court should punish the many criminal acts carried out by nation states against migrants around the world.
First published Monday, 6th November, 2017 • by John Stevenson (Senior Communications Officer)

In their article, titled, 'The Banality of Crimes Against Migrants', they refer to a new report authored by UN Special rapporteur, Agnes Callamard’ - Unlawful Death of Refugees and Migrants -  focused on government responses to worldwide flows of migrants across borders. Callamard says her report deals with "an international crime whose very banality in the eyes of so many makes its tragedy particularly grave and disturbing."

In search of monsters

He believes that the effort to move international criminal justice from war to migration is not just another attempt to expand the gamut of a cash-strapped and inefficient court, but an attempt to shift political priorities, in the Court and outside of it, away from looking for "monsters" committing spectacular violence and towards addressing increasingly normalized suffering. The very 'banality' of these crimes, he and Dr Mann argue, is a testament to their gravity and the necessity of their prosecution.

Dr Kalpouzos is the founder of the Global Legal Action Network (GLAN). 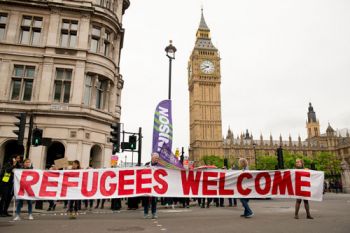 In February 2017, GLAN and the Stanford International Human Rights Clinic submitted a 108-page legal submission to the office of the prosecutor of the ICC, detailing the “harrowing practices of the Australian state and corporations towards asylum seekers”.

News reports on the submission, calling on the ICC to open an investigation into possible “crimes against humanity committed by individuals and corporate actors”, were widely published around the world, notably in Australia, the UK and the USA.

Commenting on the plight of the persecuted Rohingya ethnic population forced to flee from Myanmar to neighbouring Bangladesh, Dr Kalpouzos said:

The Rohingya crisis exemplifies the violence meted out to refugees beyond their persecution in their state of origin in Myanmar. This violence ranges from the conditions of their reception in neighbouring countries, to repeated instances of drowning at sea while fleeing, to deportation back to Myanmar. Australia's unlawful deportation of Rohingya refugees is part of a policy of deterrence of refugees and constitutes a systematic attack against a vulnerable civilian population, and therefore a crime against humanity under the Rome Statute for the International Criminal Court.