Images used to educate public about leading cause of blindness not realistic, says study

Images used to educate the public about vision loss due to the leading causes of blindness are not fit for purpose, according to a new study from City, University of London.

The researchers found that the image commonly used to represent a condition called age-related macular degeneration (AMD), which affects more than 600,000 people in the UK, did not provide a realistic representation of people’s experiences.

When people with the condition were asked about how their vision looks it was found that they instead provided a wide variety of descriptions – ranging from blurring, to distortion and missing parts of the image - which were far more complete and varied than those implied by these existing images, which just show a patch of distortion or blackness in central vision surrounded by a clear periphery.

As a result, the findings have significant ramifications for individuals, as it may lead to them misunderstanding the severity of their own condition and may in turn affect how people monitor their own disease progression.

The findings, which are published in Ophthalmic and Physiological Optics, are particularly relevant due to the increasing incidence of AMD and have implications for eye-care practice. As a result, the researchers call for the development of more realistic images of the visual symptoms of AMD for patient and public education which encompass the wide range of descriptions patients with the conditions use to describe the condition. 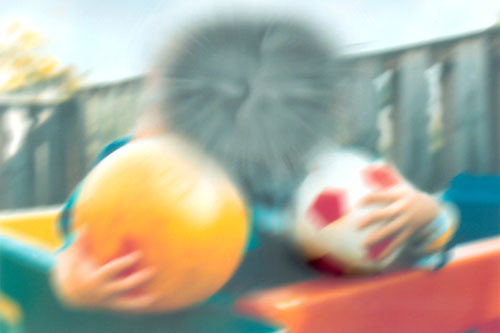 This image, which the researchers found to be unrealistic, is commonly used to demonstrate AMD (Credit: Wikipedia/Creative Commons)

These descriptions could be used to educate people about the range of possible symptoms of dry AMD and would enable optometry professionals to better understand how the view of AMD through the patient’s eyes, leading to better recognition of symptoms for people with and without the condition.

AMD is a painless eye condition that causes people to lose central vision, usually in both eyes. It currently affects more than 600,000 people in the UK and is the leading cause of vision loss. By 2020, it is predicted almost 700,000 people will have a late-stage form of the condition in the UK.

To investigate how people described the visual symptoms associated with AMD, the researchers carried out an eye exam for 29 participants, recruited primarily through the Macular Society, with a median age of 75. Three, 17 and nine patients had early, intermediate and late AMD respectively. Participants were also asked to describe visual symptoms of their condition in a conversational interview, and were asked to comment on a photograph typically used to portray the visual symptoms of AMD.

The researchers found that people with dry AMD use a wide range of descriptors for their visual experience, with the most frequently reported descriptor ‘blur’ (13 participants), followed by ‘missing’ (10 participants) and ‘distortion’ (seven participants). Furthermore, the visual symptoms of dry AMD as portrayed by commonly shown images were not the experience of most people in this study.

As a result, the researchers suggest that no one image can be used to describe the condition and that instead it may be more appropriate to develop a series of images or a dynamic representation, perhaps a series of movies or digital media, to more accurately depict vision in dry AMD.

Speaking about the study, lead author Deanna Taylor, a researcher working in the Crabb Lab in the Division of Optometry and Visual Science at City, University of London, said:

“Images showing a patch of distortion or blackness in central vision surrounded by a clear periphery are frequently used illustrators of vision with AMD, but in our study we found that when we showed participants this popular image, many unequivocally rejected it as it wasn’t realistic.

“Our findings are important for several reasons. First, we’ve shown that images that are designed to educate the public about AMD are not fit for this purpose. This is a serious issue as the images could be misinterpreted to be a sign of early visual changes in AMD but this clearly does not fit with the experience of people with early or intermediate AMD in our sample.

“We also found that the visual symptoms experienced by most people with AMD in our sample were likely to be more subtle and less simplistic than those depicted in the images; this could have ramifications for individuals about misunderstanding the severity of their own condition and may in turn affect how people monitor their own disease progression.

“We hope that through the development of new, more nuanced and realistic images, better education on AMD can be provided. This is especially important considering how the number of people with the condition is set to continue to rise in the UK and around the world over the coming decades.”