Christopher Stone, an optometry admissions officer at City, University of London has won the Unsung Hero prize at the national WOW! awards ceremony following over 50 WOW! nominations from applicants to the University. 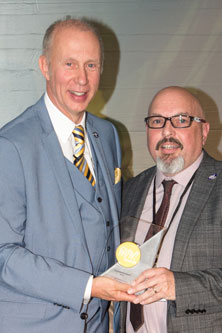 In particular the nominations highlighted the lengths Christopher went to reassure potential students, noting how he was “incredibly helpful”. Christopher received the award at the Gala Awards Ceremony in London on the 6th November 2017.

The WOW! Awards received over 21,000 nominations this year from people who wanted to give positive feedback about the Customer Service they had received, but only 14 winners were chosen.

Put forward by a student, Christopher’s award-winning nomination mentioned how he was “very patient and explained all the necessary actions and information I needed to know. I was also grateful for not feeling as if I was a burden and I received very quick replies”.

“The communication with Christopher also showed me the high standard of quality that City, University of London asks of its staff. I hope each and every potential student gets the opportunity to speak with Christopher as he was understanding, helpful and very patient in regards to questions about the process,” the student added.

Speaking about the award, Christopher said:

“It means a lot to be recognised for the work you do and the help you can give applicants to City, making the difference to customers and giving the best service you can every day.”

“Chris thoroughly deserves this accolade. He spends a lot of time helping students through the application process and he does a wonderful job recruiting for optometry. I am delighted that his time and efforts have been recognised. No longer an ‘unsung’ hero, but definitely a hero!”