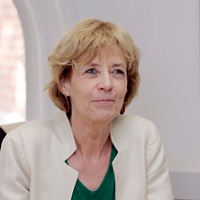 The victory of Iraqi forces over the so-called Islamic State in the city of Mosul is “extremely important” for the country, according City Middle East expert Professor Rosemary Hollis.

However, the academic says the situation in the country will become more complicated after the militant group is dispersed because there are so many rival factions fighting for power in the region.

Speaking on BBC Radio 5 live, Professor Hollis said the people of Mosul had been left “utterly traumatised” and may never recover.

“It’s very important for the future of the country and the future of the [Iraq] government,” she said. “And for the people of Mosul, it couldn’t be more important, except that they may be so damaged it’s hard to see them really recovering, ever.”

Professor Hollis, of the Department of International Politics at City, said people in Mosul had been subjected to “very harsh” conditions since so-called Islamic State took over the city three years ago.

According to the Middle East expert, the citizens also faced water and food shortages, as well as daily bombardment from international forces – including the US, UK and France – and the Iraqi army, as they fought to retake Mosul.

She explained that so-called Islamic State had suffered a “severe set-back” in its bid to keep control of the land it holds in northern Iraq and Syria. But she added that even if the group is defeated, some people who supported its ideology may continue fighting with different organisations against the competing groups in the area.

“The situation gets very complicated once the common enemy of ISIS is more or less dealt with,” she told BBC Radio 5 live.

Professor Hollis said the Iraq government now needed to regain the trust of its citizens, unify the country and help people to rebuild their lives.

But she explained this would be difficult due to the multiple armed organisations in the region, including Kurds and militia groups backed by Iran.