Soosan Lolavar’s opera ID, Please is being performed at The Place in London 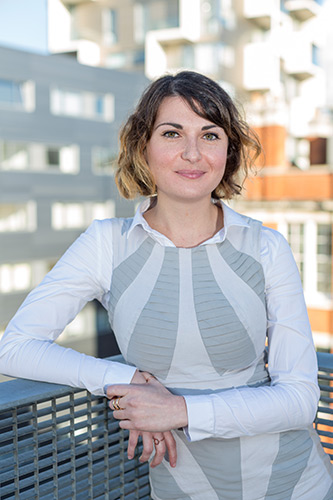 A PhD student in the Department of Music at City has composed a moving new opera in reaction to controversial US immigration policies.

Soosan Lolavar’s work ID, Please was inspired by the effects of the Donald Trump policy that bans people from six mainly-Muslim countries from entering the country.

ID, Please is a 40-minute chamber opera about immigration and border security featuring music by Soosan and libretto (words) by Daniel Hirsch, whom she met in the US while studying at Carnegie Mellon University.

It is being performed at The Place in London, on Tuesday 25th July as part of Tête à Tête: The Opera Festival 2017.

The City PhD student, who holds dual British and Iranian nationality, was personally affected by the ban, which threatened to stop her attending rehearsals for her own opera in the USA.

Iran is on the list of restricted countries and Soosan feared she would not be able to travel back into the United States and finish her opera.

Luckily, she was able to travel and complete the opera because a federal judge struck down the ban and because the UK negotiated special dispensation for dual British nationals.

Writing on the Department of Music blog, Soosan said she and Daniel originally discussed the storyline in the context of the US presidential campaign, when many in the US were concerned about the rhetoric of Donald Trump and the discussion of a ban on Muslims entering the country.

“At the time (the halcyon days of early 2016) such a move seemed like grotesque political posturing: a racist and divisive move, but surely one that no sane candidate would ever actually enact,” she said.

“Against this backdrop we briefly considered writing an opera about Trump, but decided that he would likely be gone from public life by the time of the opera’s performance and so might seem like a strange choice of figure.

“In the end we settled on a piece about immigration, set at border control in an unnamed country and time and considering contemporary rhetoric on borders, nationalism and others.”

To include verbatim text and original research, Soosan and Daniel composed an online questionnaire seeking personal experiences related to crossing international borders. They received about two dozen responses and several direct quotes from the questionnaire are included in the libretto.

Soosan used a variety of techniques to represent a feeling of “instability, fear and mechanical, dehumanising repetition”, experienced by people affected by the policy.

This included changing the rhythm of reoccurring lines, while keeping the melody of the lines the same.

She said: “ID, Please has become a complex process through which I work through my feelings of instability in the new world order, my fears for immigrant communities across the world and my concerns for the safety of my family and friends.

“As a result of recent political events, I certainly feel a greater sense of responsibility to produce a piece of work that adequately represents the complexity of such positions.”

Read more about ID, Please in Soosan’s post on the Department of Music blog