City’s work with a local primary school has helped it to obtain an outstanding score in a recent Ofsted report. Over the past few years, City has worked closely with Hugh Myddelton Primary School, offering tutoring in Maths and English and running summer schools and Spotlight Days. This work is part of a wider programme of widening participation and outreach projects run by City to improve the prospects of school children from lower income backgrounds and groups underrepresented at university.

The work that City, University of London has done with Hugh Myddelton has played a huge part in the improvements that we have made over the past two years.
Sarah Gill, Deputy Headteacher at Hugh Myddelton Primary School

Hugh Myddelton’s involvement with City has been cited in the 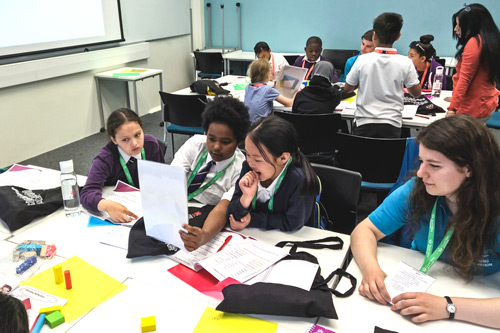 school’s most recent Ofsted report as evidence of the school’s high aspirations for its pupils. The report stated that work with universities has been “instrumental in providing older pupils with information about life after school.”

The report also said: “Spotlight Days have enhanced the school’s curriculum whereby university students join pupils to discuss engineering, mathematics and science, for example. These sessions not only complement the curriculum but provide pupils with an insight into higher education.”

In June 2015, the school was rated as ‘needing improvement’ following their Ofsted inspection and was labelled the ‘worst school in Islington’. A new headteacher and refreshed approach to teaching have vastly improved the school and the prospects for its pupils.

Sarah Gill, Deputy Headteacher at Hugh Myddelton said: "The work that City, University of London has done with Hugh Myddelton has played a huge part in the improvements that we have made over the past two years. Following our 2015 Ofsted report, we changed the way we carried out pupil progress meetings and started to target the pupils needing additional support to be ready for secondary school. We identified the 'gaps' in the children's learning and worked with the City tutors to plan and prepare additional sessions for these pupils.

“The work that City's tutors carried out with our students meant that they got the additional support that they needed so no pupil was left behind. Working with City also meant that the children's misconceptions were addressed and more time was given to them before the next lesson. Any child that needed 1:1 support was given that opportunity.”

Spotlight Days are held at City, with each event covering a different subject, focusing on the skills required in that area. They aim to provide an insight into different subject areas and career paths through university based activities.

Spotlight Days have given pupils with a keen interest in the spotlight subjects the chance to really explore that area in greater depth. They have provided challenges to all pupils that attended and they return with enthusiasm and excitement. They get to share their experiences in school assemblies which then ignites interest in pupils in younger year groups. As a result, many of our pupils now want to attend university.

The aim was to provide year 5 students with an awareness of studying languages and how this can be useful for future careers.

If you’d like to get involved in the Widening Participation team’s Primary School Outreach, get in touch with Ben.Copsey@city.ac.uk

Widening Participation gives young people an insight into what it is like to study at university and where these studies might lead.  It raises students' aspirations, shows them how higher education could help them realise their ambition and supports them in reaching their potential.