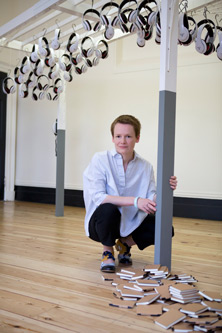 A composer has created a musical response to the architecture and history of Waterloo Bridge at Somerset House in central London.

Claudia Molitor, a Lecturer in the Department of Music, developed The Singing Bridge for the Totally Thames programme, which ran in September 2016.

Visitors were invited to listen to Claudia’s work on headphones while walking across and around the famous landmark.

The eight tracks include music mostly composed by Claudia, as well as material provided by synth due AK/DK, folk group Stick in the Wheel and poet SJ Fowler.

The sounds were created to complement the bridge’s architecture, structure, purpose, link to the River Thames, history and original female workforce.

Claudia said: “With The Singing Bridge I aim to stoke the listener’s imagination and allow them to reflect upon this particular bridge and its river. Bridges sing, each one resonating at its natural frequency to which the frequencies of the water running beneath, the wind blowing across and our walking over it add their own resonances.

“When I cross Waterloo Bridge, I often imagine the predominantly female workforce who built it during World War Two, adding their own songs to the cacophony of the industrial sounds of constructing this bridge.”

The tracks from The Singing Bridge are available from NMC Recordings. The project’s partners were Totally Thames, NMC Recordings and Somerset House. It was generously supported by Arts Council England, Tideway and the Hinrichsen Foundation.