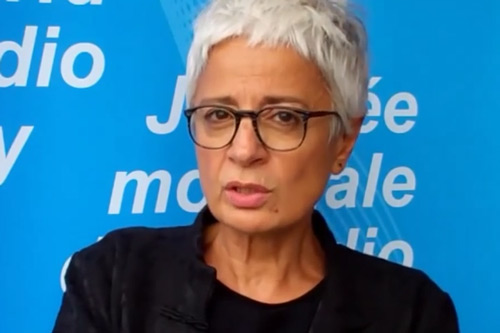 on the BBC’s 100 Women list for 2016. The City Journalism alumna is a broadcast executive, who worked at the BBC for 26 years. Liliane was named on the list for her role as head of languages at BBC World Service where she helped to put ‘different voices, faces and accents’ on BBC News.

BBC 100 Women is an annual series to profile and champion inspirational women from across the globe. The list includes women from a variety of fields, from politics and science to entertainment. During the three week-long series, the BBC features the women on their News website, Instagram, Twitter and Facebook pages and on World Service TV and Radio.

Fiona Crack, editor of the 100 Women season said: “100 Women is now in its fourth year, and we are proud of the platform it has given to many inspirational women - using the reach and journalistic excellence of the BBC to highlight the challenges, opportunities and experiences of women across the world.”

Aside from Liliane, other women highlighted include high-profile figures such as Simone Biles, Alicia Keys and Nadiya Hussain alongside campaigners, scientists and businesspeople. By sharing the stories of these women, the series will cover issues like trafficking, infertility, domestic abuse and trolling, with stories from Gaza, Uganda, Nepal and Kazakhstan.

James Rodgers, Head of International Journalism at City said: “I am delighted that an alumna has been honoured in this way. The recognition is testament to Liliane Landor’s considerable achievements as a journalist and editorial leader.”

One of the highest achievements of her career, James said, was “her understanding of the full potential of the BBC’s language services. Liliane was an important influence on my own career as a BBC journalist, being a member of the panel which appointed me as correspondent in Gaza. The fact that she was keen on the BBC having a full time international correspondent in the territory, when other global broadcasters had none, demonstrates her determination that the BBC should cover the world as fully as possible.