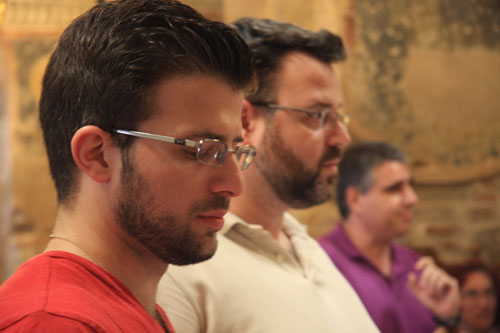 A music researcher has taken part in a cutting-edge project that mapped the insides of medieval churches to analyse their acoustics.

Dr Spyridon Antonopoulos, an Honorary Visiting Fellow in the Department of Music, played a key role in the unique study, which aimed to improve our understanding of the sounds that people would have heard hundreds of years ago.

The team used new techniques to scan the architecture of eight Byzantine-era churches in Greece, measuring a logarithmic sine sweep (an impulse ranging from 20 Hz to 24 kHz) played through loudspeakers and recorded in microphones placed in multiple locations throughout the buildings.

Dr Antonopoulos said: “Ultimately, we wanted to learn more about the role of acoustics and sound on the experience of the medieval person, but the project also has an aspect of preservation. These buildings will not be around forever and we now have the ability to capture their essential attributes in digital memory forever.”

The recorded sounds were then filtered using advanced audio signal processing techniques, producing outputs (or impulse responses) that could then be analysed by computer software to create unique acoustic signatures of each space.

This allowed the researchers to compare their subjective experiences – as performers and listeners – with actual data, such as those relating to the reverberation, clarity, and decay time of each building.

Capturing the acoustical signatures of each building will also allow future researchers to use the audio maps to make studio-recorded songs sound like they were captured inside any of the historically significant locations.

As reported by CBC and The Atlantic, the researchers recorded medieval chants that were performed in the churches by a group of chanters from Greece, led by Dr Antonopoulos.

Many of the chants were from the musicologist’s own original transcriptions from medieval sources, including some transcribed as part of his PhD research at City.

He said: “The project was a unique collaboration involving engineers, historians of art and architecture, musicologists, and singers.

"Our goal was to be as historically precise as possible, meaning we recorded singers singing music transcribed from medieval sources, in various formations and locations that reflect medieval practice.

“We also tried to take into account any changes in the layout and design of the buildings we tested since the architecture and even monumental art impacts the acoustics of a given building.”

The team is now preparing its findings for publication in several journals. Some key findings include:

It is hoped the audio signatures can be used to help create a museum that enshrines the sounds of the Byzantine era forever, creating what one of the researchers has called “an acoustical museum of the Middle Ages”.

Dr Antonopoulos added: “Our next phase may include more churches in Thessaloniki, as well as some famous monuments in Mistras.”

The research was funded by a UCLA OVCR-COR Transdisciplinary Seed Grant.

Of Bodies and Spirits: Soundscapes of Byzantine Thessaloniki from Chris Kyriakakis on Vimeo.