The constitutional rights of immigrants

In his Inaugural Lecture, Professor Dan Wilsher said that the UK has a responsibility to provide access to justice for immigrants and take into account the interests of children and the effect of exclusion on UK citizens linked to migrants.
First published Monday, 7th March, 2016 • by John Stevenson (Senior Communications Officer)

The City Law School’s Professor Dan Wilsher has delivered his Inaugural Lecture, titled “Immigration Control and the Control of Immigrants: Is there a difference?” in the Oliver Thompson Lecture Theatre.

It was a timely lecture in the context of feverish debates on the topic of immigration to the UK, the Schengen Agreement, recent terrorist attacks and the refugee crisis in North Africa and the Middle East. 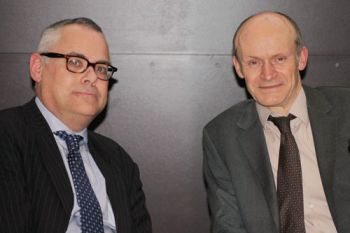 Professor Wilsher outlined what he viewed as two systems of UK immigration, System 1 - Immigration Processing and Facilitation, which was large scale, routine and functioning with few negative consequences for persons coming to live for short or long periods; and System 2 – Immigration Disputes and Enforcement frequently involving negative consequences for would-be immigrants, such as body searches, detentions, which generally involve complex case-work.

He mentioned that the favourable economic and social environment in the UK, coupled with an accommodative immigration policy framework, was responsible for the higher numbers of people seeking to settle in the UK.

Professor Wilsher maintained that the UK constitution guaranteed protection for both citizens and migrants, and that a corpus of laws - the Magna Carta, Parliament Acts, European Communities Act, Human Rights Act, Race Relations Act and the Equalities Act - helped to guarantee the rights of persons immigrating to the UK. In addition to this, he noted that while rights of appeal are statutory and can be withdrawn, judicial review cannot be withdrawn.

To illustrate this point, Professor Wilsher cited the HK (1967) case, JCWI (1995) and Clue v Birmingham (2010) which held that under the 1989 Children’s Act, parents were required to have social support in the case of disputes surrounding their children’s claim to remain.

He cited the ‘ABC’ in relation to how migrants are to be treated by the constitution – Access to justice and non-arbitrary policies to uphold the rule of law; British citizens should be able to live in Britain with family unless strong public interest against this; and Children – obligation to promote their best interests as primary concern when exercising immigration control.

Professor Wilsher concluded that "there will always be pressure to speed up systems of immigration control, but these measures should never deny access to justice in relation to fundamental rights."

Judicial Review is done by the High Court and it is a process of reviewing acts done by public authorities or a review of a court or a tribunal decision. Such review can be done with respect to the procedural issues and in relation to whether the decision was correct according to the law. It must first be examined whether a particular decision can be subjected to judicial review. Such a review can be done against a public body and a decision must constitute infringement of public law rights not private law rights (contract, tort, employment) where only individuals are involved. Only a person who has the sufficient interest in the matter can apply for a decision to be reviewed by a judicial review.