Deaf music student and campaigner performs at House of Lords 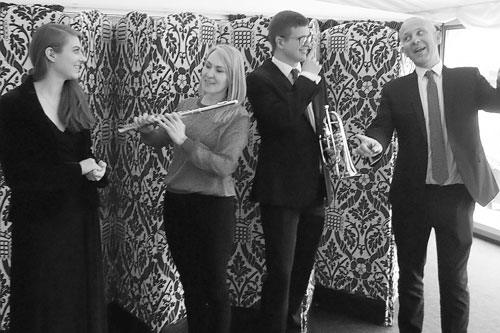 Deaf City music student Eloise Garland (above, left) has performed at the House of Lords with her ensemble 4ORTE.

The classical pianist, singer and violinist was invited to play at the Year of Sound concert arranged by the disability charity Decibels, which was hosted by the composer, broadcaster and Decibels honorary president Lord Michael Berkeley.

Eloise, who is a third-year Music BMus student and a deaf awareness campaigner, said the concert was an opportunity to highlight the skills of deaf musicians.

“The aim of 4ORTE is to raise the standards of music across the board for deaf and hard of hearing people by holding workshops, talks, and concerts in different venues across the UK,” she said. “By holding concerts, we are also showing the world what deaf people are capable of.

“The ensemble performed alongside other talented deaf and hearing actors and artists, making the event a real celebration of the achievements of deaf and hard of hearing people. I thoroughly enjoyed meeting new people at the House of Lords, including founder of Decibels, Ken Carter. The whole experience was quite exciting.”

The 4ORTE ensemble, from the charity Music and the Deaf, is made up of Eloise and three other professional deaf musicians – flautist Ruth Montgomery, pianist Danny Lane and trumpeter Sean Chandler.

Their next performance will be on Sunday 10th July, at Kings Place in London, where they will also be running a free music workshop for deaf and hard of hearing children and young people.

Eloise says her time at City has helped her to develop as a musician, while its location in central London has given her the chance to get involved in many new projects and experiences.

“City’s music department has a wide range of projects and opportunities including ensembles such as choir, gamelan, orchestra, jazz ensemble and more,” she said. “And several ensembles and projects at the university have widened my musical knowledge and experience.

“Studying in the heart of London has also opened up a whole host of musical opportunities to me. I opted to study performance at City, which has been integral in building up my confidence as a soloist. My three years at City have been fantastic."

Eloise is originally from North Wales and attended Chetham’s School of Music in Manchester before starting her degree at City.