City is to join the University of London later this year and will become one of the federation’s self-governing Colleges. In this commemorative article, City Magazine assesses what this development means for City, 50 years on from receiving its Royal Charter and 122 years since the institution’s foundation.

The welcome news that City is to join the University of London (UoL) is a key milestone in City’s long history and stands as recognition of the great strides that it has made as an institution over the last decade.

The announcement came after the UoL Board of Trustees last year agreed to the positive recommendation made by its Collegiate Council. “I am exceptionally pleased, as are my colleagues and our students,” said City’s Vice-Chancellor, Professor Sir Paul Curran. He also added:

Joining the University of London marks a significant new chapter in City’s history. It is a major opportunity but also a signal of how far we have come as an institution. We will retain our historic strengths, professional credibility and deep-rooted City of London heritage while we strengthen our international profile and expand our research and education capabilities.

City’s history dates back to the 1894 foundation of the Northampton Institute and City was granted University status by Royal Charter in 1966. City intends to join the University of London in September 2016 and its official name will change, albeit subtly, through the addition of a comma and the word ‘of’, to become ‘City, University of London’. The titles of its senior officers will also change, reflecting that City will have become an autonomous College within the UoL.

City’s logo will also change. The new logo is designed to maintain an emphasis on our identity, our heritage and our position in London, while taking into consideration its appearance in a rapidly evolving digital space. The new logo preserves the crest elements of the previous logo but (purely for design reasons) does not include the comma that will form part of City’s new official name. Watch a short video introducing our new logo:

Joining the UoL does not constitute a merger. City will continue to set its entrance criteria and examinations, award its own degrees and offer independent services to students. It will remain a chartered institution, autonomous and self-governing, with its own Council, Senate, Students’ Union and other bodies as at present.

Benefits of joining the UoL

City is joining the UoL for several reasons, not least to signal its academic standing and to benefit from the prestigious UoL brand. Benefits to City’s staff and students will include access to the UoL’s substantial library resources, membership of ‘Student Central’ (the former University of London Union, providing access to services including sports, societies, online tickets and bars) and an allocation of rooms in UoL’s Intercollegiate Halls of Residence.

It also opens up greater potential for collaboration in education, research and enterprise between City academics and research students and their colleagues in the UoL. City’s Director of Research & Enterprise Dr Karen Shaw said:

What this means for current and prospective students, is that [students] will be part of a vibrant, world class academic community which not only generates new knowledge but uses it to impact positively on society in many different ways, worldwide.

The University of London is one of the oldest, largest and most diverse universities in the world. Comprised of 18 constituent colleges, 10 research institutes and several central bodies and founded under the name London University in 1826 as a secular alternative to the religious universities of Oxford and Cambridge, the UoL can lay claim to several impressive firsts over its long history.

In 1878 it became the first university to admit women, with the proportion of female students swelling to 10 per cent by 1895 before growing rapidly over the final five years of the 19th century to 30 per cent by 1900. It was also the first Commonwealth university to appoint a female Vice-Chancellor, Professor (later Dame) Lillian Penson, in 1948. The UoL introduced many new subjects into higher education in the UK, such as modern languages and laboratory science. Today it is a family of world class institutions, collectively upholding its international reputation of academic distinction in learning and research.

And while City enjoys a unique arrangement with the City of London, whereby a new Lord Mayor is installed as Chancellor each year, the UoL’s Chancellor since 1981 is Princess Anne, Her Royal Highness The Princess Royal. She took over the position following the retirement of her grandmother, Queen Elizabeth The Queen Mother, who had held the position since 1955. 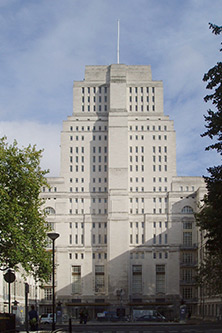 The UoL’s landmark building is undoubtedly the impressive and imposing Senate House. During the first hundred years of its existence the UoL moved between a succession of temporary homes, quickly outgrowing each of them in turn. In the 1930s the decision was taken to build what had become the world’s largest university a purpose-built, permanent home. A large plot of land behind the British Museum in Bloomsbury was purchased from the Duke of Bedford’s estate and Charles Holden, the architect behind some of the most iconic London Underground stations, was commissioned to design it.

Upon opening in 1936, Senate House was the second-largest building in London. With 19 floors and standing 64m high, it was taken over by the Ministry of Information during World War Two; its roof offering a valuable observation point for the Royal Observer Corps. Though the building was hit by bombs several times, it emerged largely unscathed from the conflict. There was speculation at the time that the reason the building had fared so well was that Adolf Hitler had planned to use it as his headquarters in London. When the Colleges began to return in 1944, the Principal of the UoL reported that examinations were carried out “without casualties, other than those normally caused by these exacting but essential tests”.

The building was later assigned Grade II-listed status in 1969 and has been used as a film set for several movies including Batman Begins, Spy Game and the big-screen adaptation of George Orwell’s novel, Nineteen Eighty-Four. Indeed, the building’s repurposed function during the war effort was said to have been the inspiration for Orwell’s description of the Ministry of Truth in the book. 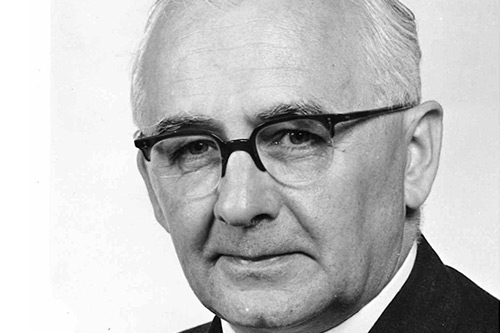 In the early 1960s the government-commissioned Robbins Report recommended that the Northampton College of Advanced Technology become a university. The City University was created by Royal Charter and Dr (later Sir) James Tait was appointed as its first Vice-Chancellor, with Oliver Thompson as Pro-Chancellor. Together they approached the Lord Mayor of London, Sir Lionel Denny, whose enthusiasm for an association between the City and the University led to an arrangement that continues today, whereby the Lord Mayor in office is invited to be the Chancellor of the University.

Transcripts of BBC television and radio reports when the Royal Charter was awarded (held within City’s archive) paint a fascinating picture of the time. Colin Riach, a reporter for BBC1’s Town & Around filed a report in which he described City as having “a lively interest in research into difficult-sounding subjects”. With a blend of deadpan stoicism and wit synonymous with BBC presenters of the age, Riach went on to remark that: “One of the staff here has an international reputation as a researcher and consultant on tall buildings and cooling towers. He did not advise on the towers that recently collapsed.”  The University had recently received a £2.5 million grant for new buildings from the University Grants Committee. Riach, on seeing the works first hand, observed: “A new landscape is forming around Northampton Square. A campus along American lines – spacious and designed for working and living … the future for The City University seems brighter and busier than ever.”

Meanwhile on the Home Service (which later became Radio 4), BBC commentator Audrey Russell was posted to City’s first graduation ceremony at the Royal Festival Hall. “In all – and I think this is very laudable,” she said, “there are 13 first class honours and 57 second class honours awarded among 88 graduates.” After the ceremony, she interviewed 1949 alumnus John Hodge, who by that point was working for NASA as Flight Director on the Gemini and Apollo space programmes. Hodge was awarded an honorary degree at the ceremony and Russell asked him whether the place had changed. “The Aeronautics Department has changed quite a bit,” said Hodge. “They have some wonderful new equipment there now. It looks as though they’re really moving ahead.” 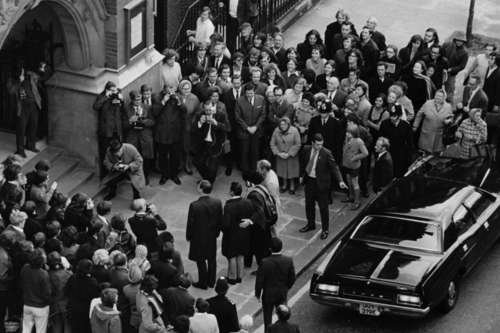 The Lord Mayor noted to the Home Service later the same day that it was “a fine portent that one of the University’s first honorary graduates should be a former student playing a leading part in the plans for a voyage to the Moon”. The Apollo 15 astronauts would later pay City a visit in 1971 and presented Vice-Chancellor Tait with a piece of heat shield from the command module.
One of those graduating in 1966, with a first class BSc in Mechanical Engineering, was Charles Pywell. After graduating, his career progressed from construction, mining and infrastructure, to establishing his own project management consultancy company in Australia. He remembers his graduation clearly: “The venue was an impressive building, especially for my parents who had never been to London before. I think they were very proud, whereas I just took it for granted that I would get a degree. I was, however, a bit pleased that it turned out to be a first.”

“It was, of course, the ‘Swinging Sixties’ at that time. I’m not sure my friends and I took full advantage of that, but we did have a great time. The buildings were fairly old and a bit like a rabbit warren. The lift in the main building was a law unto itself. It only did three floors and couldn’t get those right most of the time. But we didn’t mind those aspects – we were there to learn.”