Staff, alumni and honorary graduates among those recognised in the Queen’s New Year Honours list

City University London is celebrating the achievements of alumni, honorary graduates and staff who have been recognised in the Queen’s 2016 New Year Honours list. Fourteen members of the University were awarded honours in recognition of their contributions to sectors ranging from health to the arts.

was Carmel McConnell (MBA, 1993) who has been made a Member of the British Empire (MBE) for services to school food. After completing her MBA at City, Carmel went on to establish Magic Breakfast, a charity that provides free nutritious breakfasts to 23,500 children in more than 400 schools. Carmel said receiving the honour “means a huge amount” to her. Receiving the honour, she hopes, will open doors for Magic Breakfast, meaning they can have “more conversations with people that want to help us.”

Also among those to receive honours was Jaz Rabadia, (BEng Mechanical Engineering, 2006 and MSc Energy and Environmental Technology and Economics, 2009) who was made a Member of the British Empire. Jaz was awarded the MBE in recognition of her contribution to sustainability in the energy management sector and diversity in the STEM sectors.

Following completion of her Masters degree in 2009, Jaz joined the energy 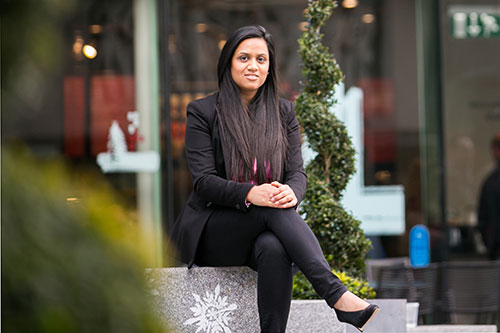 team at Sainsburys. A role City had prepared her for, having written her dissertation on Sainsburys energy management as part of her degree.

Jaz is now the Senior Manager of Energy and Initiatives at Starbucks and was the youngest person in the UK to be awarded chartered energy manager status by the Energy Institute. In 2015, she was elected onto their Board of Trustees. Jaz also volunteers as a STEM Ambassador, reaching out to schools and college to promote the engineering and energy sector as a career path. “Starbucks is a massive global brand, and we have the potential to make a real positive impact on the environment. I hope by telling my story I can show how engineering isn't just about hard hats and spanners, but equally is about creativity and sustainability.”

“I was very humbled to have been recognised in the New Year Honours list,” Jaz said.

My initial reaction was disbelief that I had even been nominated, it’s great to be recognised in this way and I am looking forward to meeting the Queen.

All those who have been recognised will be invited to a ceremony held later in the year at a royal palace, attended by a member of the royal family.

Harvey McGrath is a British business executive and celebrated philanthropist. He received an honorary degree from City in recognition of his contributions to British business. In the New Year Honours list, Harvey received a Knighthood for services to economic growth and public life.

Alan Yarrow, a specialist in investment banking and former Lord Mayor of London, was installed as the Chancellor of City in 2014 and conferred an Honorary Doctorate of Science in recognition of his services to the City of London. Alan received a Knighthood for services to international business, inclusion and the City of London.

Dames Commander of the Order of the British Empire (DBE)

Heather is a lawyer, businesswoman and broadcaster who was awarded an honorary degree from City in 1999. In 2011, she was the first woman to be appointed as a director of the Football Association. Heather was made a Dame Commander of the Order of the British Empire for public service and services to football and equality.

Order of the British Empire (OBE)

Maree’s career in healthcare began at City when she studied for a degree in Nursing and Midwifery. She is now Head of Emerging Infections at the Department of Health. Maree was awarded an OBE for services to public health.

Pim has had a distinguished career in the arts, working in opera, theatre and the visual arts. She is currently the Deputy Director of the National Portrait Gallery. Pim was awarded an OBE for services to the arts.

Professor Helen Odell-Miller is a Professor of Music Therapy and Director of the Music Therapy Research Centre at Anglia Ruskin University. She received an OBE for services to music therapy.

Cedric was elected a fellow of the Nautical Institute in 1996 and became the Chief Executive in 2003. He was a Director of Clarkson Research Studies between 1992 and 1999 and served at sea as a cadet and Chief Officer of Ellerman City Liners. Cedric was awarded an OBE for services to the maritime industry.

Member of the British Empire (MBE)

Bradley is the Artistic Director of Greenwich and Docklands International Festival, an independent event he founded in 1996, organised by charitable organisation Greenwich+Docklands Festivals (GDF). He was also the Co-Artistic Director of the Paralympic Opening Ceremony in 2012. Bradley received an MBE for services to Culture and Disability Arts particularly in London.

David is an optometrist and has spent time in Malawi, Moldovia and Romania providing sight tests for people who live there. David received an MBE for services to optometry particularly voluntary service to optometry abroad.

Janet has spent her career working in the field of disability and SEN within the voluntary sector. She currently works as the Head of Disabled Children’s Services for the London Borough of Enfield. Janet received an MBE for services to children with special educational needs.

Helen is the Director of Artichoke, a registered charity that creates large-scale public art shows and events. Helen founded the Artichoke Trust in 2005 with Nicky Webb. She received an MBE for services to the arts and outdoor performance.

Jaz is the Senior Manager of Energy and Initiatives at Starbucks. She also volunteers as a STEM Ambassador to encourage more young people to enter the field of engineering. Jaz received an MBE for services to sustainability in the energy management sector and diversity in the STEM sectors.

The full New Year Honours list recognises the achievements and service of extraordinary people across the United Kingdom.