A virtual reality world called EVA Park can improve the communication of those who have impaired speech and language following a stroke, according to research by academics at City, University of London.

The study, which is published in PLOS ONE, is the first exploration of multi-user virtual reality in aphasia therapy and shows the potential for technology to play an important role in improving the everyday lives of people with the condition. 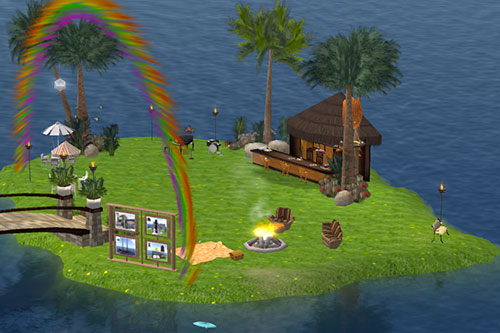 Aphasia is a language disorder affecting about one third of stroke survivors. It can virtually eliminate speech, with profound consequences for a person’s quality of life. The effects on personal and social relationships are particularly devastating, with loss of friends commonly reported. However, the problems of aphasia are responsive to treatment.

EVA Park is a multi-user virtual world which enables people with aphasia to engage in conversation with each other, or with therapists and support workers. It contains a variety of virtual locations, including a town square and attractive green spaces. Users are represented by personalised avatars and the virtual EVA Park island gives them the opportunity to practise functional and social conversations and gain confidence in an interactive space.

Examples include everyday conversations that most of us take for granted, such as ordering food in a restaurant, requesting a hair cut or calling the police in an emergency. EVA Park was developed by researchers from the Division of Language and Communication Science (LCS) and the Centre for Human-Computer Interaction Design (HCID) at City, University of London. People with aphasia were consulted in every stage of the design.

The EVA Park team took 20 participants with aphasia and gave them five weeks intervention. During this time participants received 25 daily language stimulation sessions in EVA Park lasting around an hour. Sessions were led by support workers, most of whom were qualified speech and language therapists. All participants had had a stroke and the mean age of the group was 57.8. The study employed a quasi-randomised design, which compared a group that received immediate intervention with a waitlist control group.

Participants spent an average of 40 hours in EVA Park showing that they were very accepting of the space, and even used it outside their scheduled sessions with the support worker. Results demonstrated excellent compliance with the intervention, with no participants lost to follow up and most receiving at least 88% of the intended treatment dose.  Intervention brought about significant gains on a measure of functional communication.  Gains were achieved by both groups of participants, once intervention was received, and were well maintained.

Professor Jane Marshall, a researcher in the Divisional of Language and Communication Science at City and lead author of the study, said:

“Our results show how technology can benefit people with speech and language disorders such as aphasia. Virtual reality may help to reduce feelings of embarrassment that can accompany real world communication failure, so encourage the practice of difficult communication exchanges.

“We designed EVA Park to offer a playful and immerse experience.  We found that delivering speech and language therapy within the world can have really positive results and we’ve shown specifically that supported conversation within EVA can improve the everyday communication of people with aphasia. We are convinced that Eva Park can make a significant impact on the lives of people with aphasia.”

“Evaluating the benefits of aphasia intervention delivered in virtual reality: Results of a quasi-randomised study” by Professor Jane Marshall et al is published in the journal PLOS ONE. Read more