Installation invites the visitor to test their own eyes and brains

A new exhibition at Somerset House by an academic from City University London offers an insight into visual illusions and schizophrenia.

Featuring cutting-edge research and a number of illusions, the installation invites the visitor to test their own eyes and brains and presents pioneering research that is shedding light on the way that the brain works and forging new approaches to diagnosis and care. 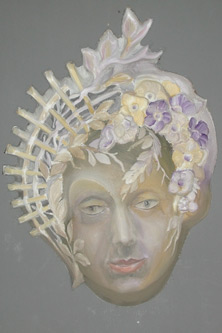 Entitled Utopian lab: Illusions – A window to your brain, the work is by Dr Danai Dima, a Lecturer in Cognitive Neuroscience at City University London and a Senior Research Fellow at the Department of Neuroimaging at King's, and artist Shelley James.

The exhibition is part of a project from the Utopian lab at King’s College London, and runs until 18th August 2016. The lab, which is part of the Health Faculties, also offers a contemporary glimpse into the crusade to understand, save and compliment the human body.

Mainly investigating cognition in psychosis, Dr Dima employs neuroimaging methods, such as fMRI and EEG, and connectivity analyses in combination with genetics to further understand processes in the brain. This enables Dr Dima to look at working memory, facial affect and visual illusions in people with psychosis.

In the brain, perception is the result of an interaction between sensory signals (bottom-up processing), and models stored in memory (top-down processing). A crucial balance between predictions and prior knowledge has to be maintained in order to make sense of the environment around us. In schizophrenia, perception is impacted as there is no longer such a balance, leading to psychosis.

“The exhibition includes a piece thatuses the ‘hollow-mask illusion’ to investigate the interaction between top-down and bottom-up processing. The hollow mask illusion occurs when a hollow mask is erroneously perceived as a normal convex face. Illusions are a useful tool for studying the impact of previous knowledge and contextual information on perception, because what is perceived is substantially different from the real sensory input.

“Schizophrenia impacts on perception by creating an imbalance between top-down and bottom-up processes. This becomes more manifest when the thing being perceived is ambiguous, like an illusion. People with conditions such as schizophrenia are not fooled by the hollow-mask illusion and my research hypothesises that this is because patients suffering from schizophrenia rely more on stimulus-driven processing than on top-down processing (memory).