A piece of City's history 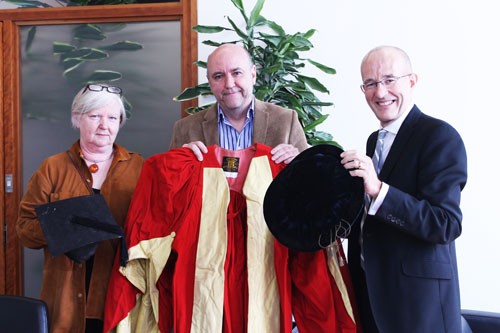 The gowns included a Doctor of Science (DSc) academic robe and cap. They were presented in the original box, labelled with gown makers Marcia Blair and Dr Walmsley’s name.

Kate Rosevear, Dr Walmsley’s great granddaughter, told the Vice-Chancellor that her father died 11 years ago and among the things left to her was the box containing the gown. “I’ve been sorting through our family history and returning things to their rightful homes,” she said. “The gowns belong to City and are part of the University’s history so I thought it was time to send them home. It was great to visit and hear more about our great grandfather, who died long before my brother Michael and I were born.”

Dr Robert Mullineux Walmsley became the first Principal of the Northampton Institute in 1896. Previously, he was a technical teacher at Finsbury Technical College before becoming a Professor of Electrical Engineering and Applied Physics at Heriot-Watt College in Edinburgh.

Dr Walmsley’s experience at Finsbury Technical College influenced his early leadership of the Northampton Institute. During his time at the helm, he expanded the engineering areas of the institution to include subjects like aeronautical engineering.

The Principal laid the foundations for the links between the Institute, business and the professions that are still so important today. In 1903, following a visit to various technical educational institutions in America, Dr Walmsley introduced the sandwich course where students spent time during the course at a firm, while maintaining a degree of academic supervision. Committed to enhancing the prospects of the Institution’s graduates, Dr Walmsley took personal responsibility for finding work placements for students. He remained in post until his death in 1924.

Kate and Michael’s visit was a unique occasion where we were able to connect to the University’s earliest days. They were quite amazed at the 120 year old story of City and the influential role their Great Grandfather played in shaping an institution that is now a globally recognised name.During the meeting, Kate and Michael offered to share further archive material, which will help us to build upon our knowledge of those earliest days.
David Street, Director of Development and Alumni Relations