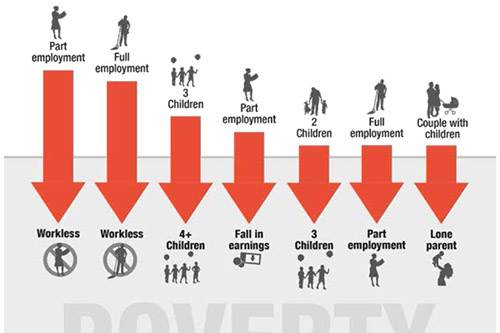 It also reveals other factors driving transitions into poverty, including having more children and parental separation.

A quarter of children experience poverty

The report also shows how children move in and out of poverty over time, finding that around a quarter of children in the UK were below the poverty line at some point between 2010 and 2012.

During the two year period 12 per cent of children remained in poverty throughout, 7 per cent fell into poverty and 6 per cent escaped from poverty.

Dr Matt Barnes, from the Department of Sociology at City, said: “Understanding the transitions or movements into and out of poverty is essential if we want to put in place mechanisms to prevent people falling into poverty and to help them escape from it.

"Government may want to look at what it can do to provide greater protection for lone-parent families, larger families and people starting a family for the first time, and for families that experience events such as loss or reduction of work or earnings, and parental separation.”