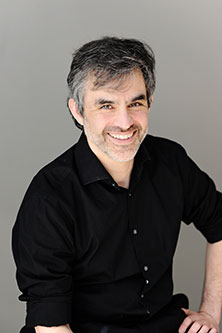 An album by City musician Dr Alexander Lingas and his group Cappella Romana has been named on the Gramophone Editor’s Choices list for August.

The release, Passion Week, is described as an “outstanding achievement” by the classical music magazine.

Directed by Dr Lingas, a Reader in the Department of Music, Cappella Romana is a vocal ensemble that is best known for performing medieval Byzantine chant.

Passion Week is a composition by Lithuanian-born Maximilian Steinberg, who completed the piece in 1923 while living in Russia, one month before the country introduced a ban on sacred music.

According to Dr Lingas, Steinberg's work is a choral setting of Russian chant comparable in its scale and technique to Rachmaninoff’s famous All-Night Vigil (the so-called Vespers), Opus 37.

Gramophone, which has picked the recording as one of the top 12 releases of the month, praises the Cappella Romana singers for their “eloquent brilliance” in a review of the album.

The review states: “This important and exciting release from the Portland, Oregon-based 26-strong chamber choir is a notable successor to their ‘Good Friday in Jerusalem’ disc. Under their inspiring director Alexander Lingas they turn their attention to a recently rediscovered choral gem… Their unanimity of attack and fastidious approach to dynamic contrasts are just two hallmarks of an outstanding achievement… This is definitely a disc to savour.”

Passion Week made its debut at number seven on the Billboard classical chart, following on from the success of Good Friday in Jerusalem, which made it to eighth spot earlier this year.

Dr Lingas said: “Nine decades after it was suppressed, Steinberg’s Passion Week is finally receiving the attention it deserves.

“The recovery and public presentation of this forgotten masterpiece demonstrates once again the impact of scholarly and creative work at City's Department of Music.”

Cappella Romana is a professional vocal ensemble that performs early and contemporary sacred classical music in the Christian traditions of East and West. The ensemble is known especially for its presentations and recordings of medieval Byzantine chant (the Eastern sibling of Gregorian chant), Greek and Russian Orthodox choral works, and other sacred music that expresses the historic traditions of a unified Christian inheritance.