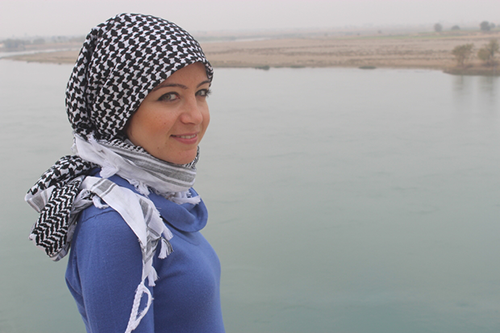 London alumna has received the prestigious Peter Mackler Award for Courageous and Ethical journalism. Zaina Erhaim, who studied for a Masters in International Journalism at City, has been awarded the 2015 prize for her work covering the conflict in Syria.

The award-winning journalist lives in Aleppo, Syria where for the last two years she has worked training more than 100 citizens in print and TV journalism and helping to establish independent magazines and newspapers there.

Zaina also works as the Syria project coordinator with the Institute for War and Peace Reporting (IWPR), an organisation that supports reporters in countries in conflict, helping them to focus on human rights and justice issues. As part of this project she set up a series of blogs that aim to cover the history of the uprising and war through the eyes of Syrian women, by allowing regular citizens to write stories of their own experiences. She has also written extensively about the lives of civilians currently living in the war-torn country, including articles for her own website and the Guardian.

Citizen journalists in Syria are a key source of news about the ongoing conflict. In providing ordinary citizens with a chance to document their experiences, Zaina has played a vital role in sharing information about the conflict with the rest of the world.

There were a number of steps leading to her receiving the award, Zaina says.

If I hadn't I received the Chevening scholarship, I wouldn't have been able to make it to London and study at City and if I hadn't had my MA I wouldn't have been accepted to work for BBC. Without the BBC record I wouldn't have made it to IWPR which gives me the chance to do what I love without worrying about supporting my displaced family, I am grateful for every and each of these steps.
Zaina Erhaim, Masters in International Journalism

The Peter Mackler award was established in June 2008 in remembrance of Peter Mackler, a journalist renowned for his ethical journalism and work championing freedom of expression. The award recognises journalists that demonstrate a commitment to reporting in countries where independent media and freedom of information are under threat. The award is adminstered by Global Media Forum, Reporters Without Borders and Agence France-Presse.
Zaina will be presented with her award at a ceremony on Thursday 22nd October 2015, at the National Press Club in Washington DC.
Image published courtesy of Agence France-Presse/HO/Peter Mackler Award.
Tags student success, journalism, award
Join the conversation #graduatesuccess
Share this article
Further Information