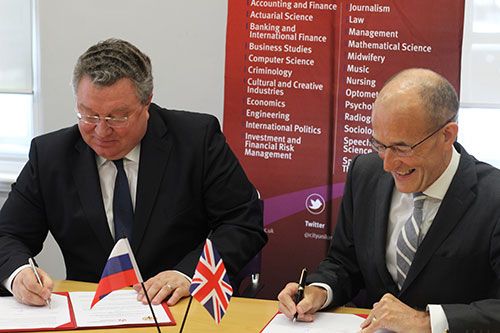 City has enjoyed long-standing links with Peter the Great St Petersburg Polytechnic University. The first collaboration agreement with this Russian university was agreed in 1994 and subsequent protocols were signed in 2005 and 2006. An agreement signed in 2012 covered collaboration in education and research. The dual-award, full-time MSc programme in Computer and Information Engineering developed with Peter the Great St Petersburg Polytechnic University under a UK Government grant, is now in its eighth year. There are over 100 Russian students at City: they form one of the largest groups of Russian students at a UK university.

The Strategic Partnership will be in place for the next five years and will support the development and implementation of Masters and PhD programmes; Academic Mobility programmes; research collaboration and exchange of research materials; the joint publication of research; cooperative seminars and workshops.