Ground-breaking work is given prominence in a cover story for the prestigious monthly magazine, Communications of the ACM (Association for Computing Machinery).
First published Monday, 4th November, 2013 • by John Stevenson

City University London researchers and their partners involved in the EU-funded Mirror consortium, have produced new mobile phone technologies, which are designed to assist support carers in residential homes to be more creative and reflective in caring for people suffering from dementia. 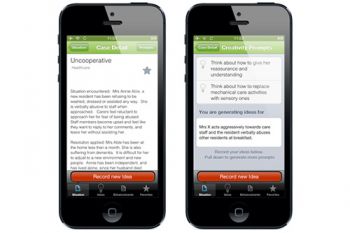 In a cover story featured in the November 2013 issue of Communications of the ACM, the prestigious monthly magazine of the Association for Computing Machinery (ACM), several members of City's Centre for HCI Design, along with project partners from other institutions have described their ground-breaking work.

Dementia covers a wide range of symptoms associated with a decline in memory and thinking skills that are severe enough to reduce a person's abilities to perform everyday activities.

It is estimated that by 2051, one in three persons in the UK population will be affected by this condition as a sufferer, carer or relative.

In spite of the benefits it can offer to both sufferers and carers, there is a virtual absence of the use of digital technology in dementia care.

As well as developing innovative mobile phone apps, City's Mirror project researchers have discovered that initial evaluations of the apps' use in residential care homes has demonstrated the benefits and challenges of technology take up in dementia care.

"We are very pleased to have been given such a high profile in Communications of the ACM. It is the monthly magazine of the Association for Computing Machinery (ACM), one of the oldest and most prestigious academic organisations for the advancement of computing as a science and a profession."

Established in 1957, Communications of the ACM is sent to all ACM members, currently numbering over 100,000. The articles are intended for readers with backgrounds in all areas of computer science and information systems.