Founded in 1951, the Sarajevo-based Academy is the leading non-university public research institution in the country.

Howden/Royal Academy of Engineering Professor in Compressor Technology, Professor Ahmed Kovacevic, was elected as an academician of the Academy of Sciences and Arts of Bosnia and Herzegovina in December 2022.

The inauguration of new members is scheduled for 27th April 2023 at the Academy in Sarajevo. 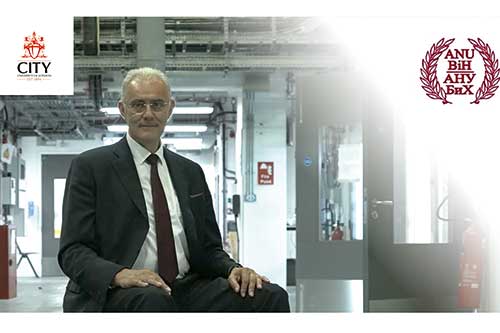 Together with the then only senior professor at the University of Tuzla, he was instrumental in recruiting experts from industry with higher education qualifications to support teaching at the Faculty. He continued educating students alongside performing military service during that war. He was well supported by the University of Tuzla and in particular its then rector, Professor Sadik Latifagic. The budding academic made an agreement with the university to return as frequently as possible despite leaving the country two years after the war ended in Bosnia.

After he joined City in 1998, Professor Kovacevic continued to support the University of Tuzla from 1998-2008 by lecturing in Engineering Design. The main impetus for maintaining such a close connection with Tuzla was the necessity to educate Bosnian higher education engineering academics after a devastating war. Professor Kovacevic would take holidays from City to return to Bosnia five to six times a year for a week to deliver lectures, support students with their projects, and examine them. Many of these students are now leading engineers and managers of Bosnian companies. It was only in 2008 when the first lecturer in Engineering Design at the University of Tuzla was appointed after completing his PhD, that Professor Kovacevic stopped returning to teach.

However, with the assistance of the European Universities Association’s Bologna Process, he continued supporting some postgraduate courses and the post-war transformation of the educational system in Bosnia and Herzegovina. Over the past 25 years, he has hosted many Bosnian researchers at City’s Centre for Compressor Technology.

At City, Professor Kovacevic established a group project for final year students on MEng courses called the European Global Product Realisation. This was a state-of-the-art programme utilising virtual technologies to educate students on the practical aspects of Engineering Design. It ran from 2004-2019 in collaboration with several universities across Europe, including those in Bosnia and Herzegovina. The last year of the project was hosted by the University of Mostar and Masterwerk, a firm from Bosnia and Herzegovina.

In terms of research, Professor Kovacevic began his career in 1986 on a project funded by the Academy of Science and Arts of Bosnia for the development of a family of screw compressors for the then leading compressor Bosnian compressor manufacturer Trudbenik Doboj. Their compressors are still used in countries of the former Yugoslavian federation. His whole career has been focused on improving the energy efficiency of such machines and educating students and professionals on principles of Engineering Design.

Professor Kovacevic is the Director of City's internationally renowned Centre for Compressor Technology. He continues to deliver world leading research and impact in this area.

He is delighted to be elected to the membership of the Academy of Sciences and Arts of Bosnia and Herzegovina, and said:

“I am honoured that the Academy has recognised my efforts to support and promote the scientific excellence of Bosnia and Herzegovina by electing me as a member. This is great recognition not only of my work but also a tribute to all of my teachers, colleagues, close friends and family who have supported me along my journey. I am proud to have had an opportunity to contribute to my home country. I will certainly continue to work proactively on the further promotion of Bosnia and Herzegovina and its Academy of Sciences and Arts with the hope that this will help young scientists and artists in Bosnia to thrive and succeed.”