Arya Fatih, MA Broadcast Journalism (2022), surprised her family when she stepped onto the podium at the Barbican Centre to deliver a speech at her graduation ceremony today. Watching her put on her gown and mortarboard, her father said: “I am so proud of my princess.” 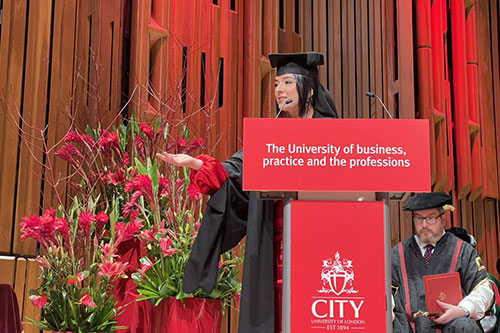 Originally from Afghanistan, a country in which women’s rights to education are currently endangered, her graduation took on deeper significance today.

Prior to joining City, University of London, Arya had studied a BA in Politics and International Relations at Queen Mary University of London. After obtaining her bachelor’s degree, she spent the following year working at the House of Commons as a Parliamentary Assistant. In her government role, she worked on communications, policy, speechwriting and correspondence.

She was awarded a scholarship to pursue her master’s at City by the Aziz Foundation, a charity that supports British Muslims into higher education and into careers in which they are typically underrepresented, to create a more equitable and representative society in the UK.

Since completing her master’s at the end of 2022, Arya joined the Sky News team as an Output Producer. In her first few months, she has worked on two documentaries, on The Great Debate with Trevor Philips and in the foreign desk news department. She is currently working on the 24-hour rolling news section. She has also previously worked on ITV’s Good Morning Britain.

“I see journalism as a public service,” she said. “As journalists, our role is to hold the powerful accountable and to serve the public by keeping them informed.”

Representing the School of Communication and Creativity, she addressed her fellow graduates:

We live in times of great uncertainty. A time where it’s scary to be a journalist. Where fake news is at an all-time high, where we are constantly racing against a clock in the newsroom. But we must persevere.

We must act and never lose a sense of outrage at the injustices that surround us. It is our job to be storytellers to share the stories that matter. Those of real people, that are affected by real issues.

Our role as journalists is so important. I want to remind you how lucky we are to live in a country where we have a free press.

I’m originally from Afghanistan, a country where the Taliban have made it compulsory for women journalists like me, to cover their faces. The same country where male journalists stood in solidarity with their female colleagues by also covering their faces when live on air. That is what we must learn from one another as we compete to get the best exclusives: community and solidarity.

Journalism plays an important role in holding those in power accountable. The public deserve to make well-informed decisions. It is our role to learn from them and support them in achieving that.

So, work hard, pay it forward, be kind and compassionate and make sure you do your job to the best of your ability.

Looking ahead, Arya’s primary interest is working in the foreign news office – reporting international affairs – which she first became interested in after studying the ‘Reporting the Middle East Specialism’ module at City.

At Sky News, she has had the opportunity to work as the Deputy Foreign News Editor several times. She hopes to one day travel abroad and work on film producing with foreign correspondents.

Discussing her career so far, she said: “All the little things came together and I do a job I love. Every day I’m happy to get up.”