Since the Russian invasion in February, about 8 million Ukrainians have fled the country. After eight months of fighting – and with no end to the war in sight – the prospect that many refugees may never return will exacerbate an ongoing population decline in Ukraine. The mass exodus will make it harder for the country to remain a viable independent state with a functioning economy.

Between 1991 and 2014 – the year of Russia’s invasion of Crimea and the Donbas – Ukraine’s population dropped from 51.7 million to 45.1 million. By 2020, if you exclude the territories already occupied by Russia, the population had dropped to 37.3 million. Long before the 2022 invasion, Ukraine was in danger of running out of Ukrainians.

Things are much worse now that more than a fifth of the remaining population currently lives in exile. These people are not a random cross-section of Ukrainian society. Nearly all are women and children – only 8% of refugees are men aged 18–59, as most men in this age category are barred from leaving. The better educated are also overrepresented: 75% have some tertiary education and nearly half have university degrees. They are also young – people 60 years and older account for only 17% of the refugee population, much less than their share in the Ukrainian population as a whole.

More may still leave. Attacks by Russia’s newly acquired Iranian-made drones, focused mainly on civilian infrastructure, are in part meant to terrify people and encourage them to flee across the border. By destroying the country’s productive assets, these attacks further exacerbate the already dire state of the Ukrainian economy. GDP is forecast to decline by 35% in 2022, and the rate of inflation for 2022 is 30% – largely driven by the fiscal deficit, which is 23% of GDP.

Deprivation will drive more people out, compounding Ukraine’s economic problems and reducing the government’s ability to raise revenue. This will inevitably undermine morale at the front. It’s something of which Vladimir Putin is well aware. Having failed to immediately conquer Ukraine, the strategy is to weaken it through depopulation. Hence also the forced relocation of around a million Ukrainians to Russia’s interior.

To be clear, western European economies could benefit greatly from an infusion of skilled Ukrainian refugees. High-skilled immigrant workers generate a surplus in the countries where the settle because they raise overall productivity, lessen inequality and also pay more in taxes than they receive in benefits. But Ukraine needs these people more. If western countries deem Ukraine’s future viability to be vital they will not want it hollowed out through emigration.

Putin had hoped, however, that overwhelming western nations with refugees would destabilise them – especially Poland. So far, he has been disappointed.

Some useful historical background. From the mid-14th century to its demise as an independent state in the late 1700s, Poland (joined with Lithuania) dominated most of modern-day Ukraine. When the borders of a reconstituted Polish state were finalised in 1921, they encompassed territory in the south-east with large Ukrainian majorities – overall 14% of Poland’s population before the second world war was ethnically Ukrainian. Time and again, over the centuries, Ukrainians rebelled against Polish control, massacring Poles (as well as Jews).

As the borders shifted west in 1945, millions of Poles were driven from their homes in what is now western Ukraine and sent to populate lands newly acquired from Germany (south-east Prussia, east Pomerania, Silesia and Neumark). A Ukrainian insurgency within Poland only ended in 1947, when 150,000 ethnic Ukrainians were forcibly resettled from the south-east of the country and also sent to the formerly German territories.

Given this grim legacy, no one is perhaps more surprised and indeed disappointed than Putin. not only by Poland’s willingness to provide sanctuary to 1.5 million Ukrainians, but by the generous help extended to them by ordinary Poles.

Poland, along with neighbouring Estonia, Latvia and Lithuania, is also providing significant aid to Ukraine, in stark contrast to its far richer EU partners to the west. These four countries are those most likely to be Putin’s (or his successor’s) next targets. Yet how safe will the rest of the continent remain if Russia is not stopped in Ukraine? 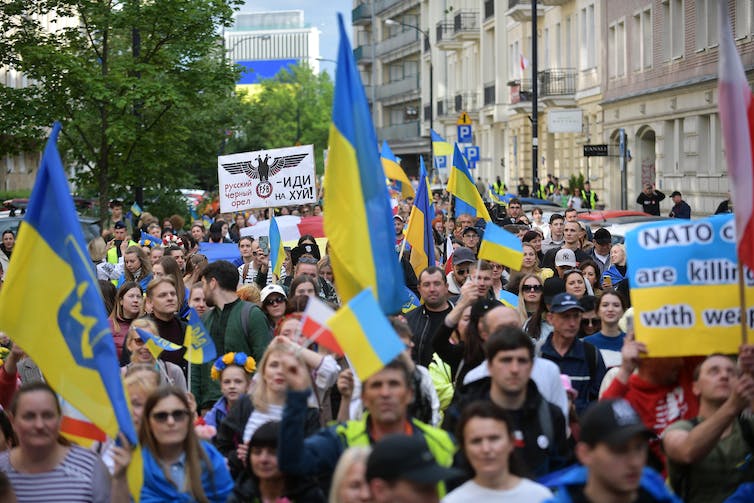 March of Gratitude’: Ukrainian refugees gather in Warsaw to express their thanks to Poland for taking them in. Photo: EPA-EFE/Marcin Obara

Ukraine will need more assistance – not just weapons and ammunition, but economic assistance – to keep the civilian population from having to leave just to feed their families. Again, given the long-term threat to Europe, it is not hard to contemplate who should provide it. This year, as of October 4, total assistance to Ukraine amounted to €93.7 billion (£80.7 billion) of which €38.8 billion is military assistance. This amounts to about half the country’s pre-war GDP.

Overall, EU member states and institutions, in their entirety, contributed only €29.2 billion against €52.3 billion by the US.

The costs will only rise. Should the war end tomorrow, the World Bank estimates that reconstruction of Ukraine may cost US$349 billion (£303 billion), and some estimates go as high as US$1.1 trillion. Without the prospect of reconstruction, will Ukrainian women return home with their children to face penury, or will their demobilised men choose to join their families abroad?

But while the war continues, refugees are building new lives in exile. Remote technology enables Ukrainian children to engage with their country’s national curriculum, but at the same time they are increasingly integrating into host country education systems. Currently, 13% of the 4.4 million refugees registered for temporary protection in Europe have plans to return home in the near future, and 10% are planning to move on to another country.

Putin would have preferred the swift and bloodless restoration of Ukraine to Russian control. Barring that, he hopes to grab what territory he can, and leave the rest a depopulated, hollowed-out husk ready to collapse back into a Russian empire in the future. When the war ends, Ukraine’s next struggle – to lure its people back home – will begin.