By Dr Sotiris Georganas, Reader in Behavioural Economics in City’s Department of Economics

People really dislike inflation. Today, with US annual inflation still above 8%, one in five Americans consider it the country’s biggest problem – spelling trouble for the Democrats at the November mid-terms.

Inflation is also the top concern for voters around the world, while in the UK, the public wanted the government to deal with it before thinking about tax cuts (but the government had other ideas).

From the Arab spring to the recent Kazakh unrest, price rises often lead to mass discontent. There’s even a word for fear of prices – timophobia – and there’s plenty of it in Europe at present. Scarcely had this autumn started than 70,000 people gathered in Prague to protest energy hikes, blaming the EU and Nato. Anti-European populism has triumphed in the Italian election, with the far-right often using the energy crisis to attack the establishment.

Yet this discontent is at least in part the result of misconceptions. People tend to misperceive inflation as higher than it actually is, which stokes the potential for unrest. Economic research suggests this misperception is particularly common when the prices of everyday items are rising fastest, as they are today. So what explains this, and what can we do about it? 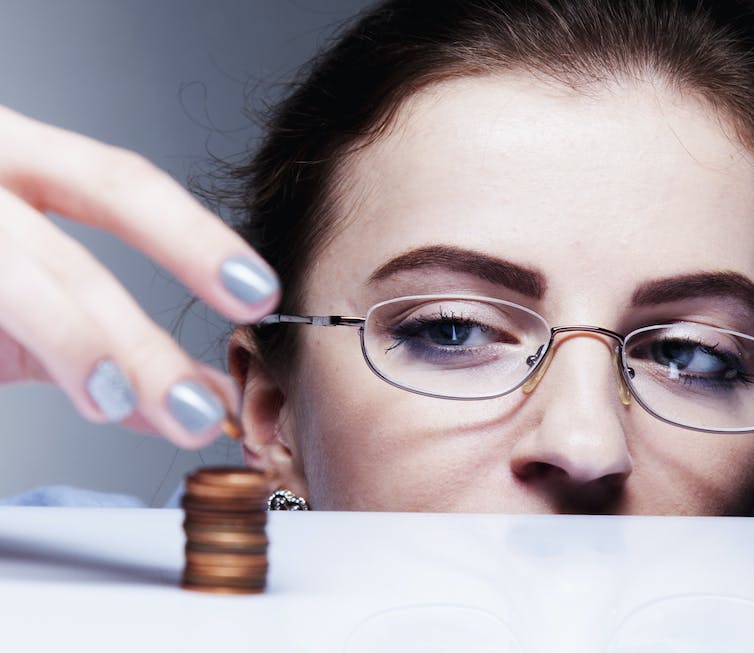 A strange thing happens when we think about prices. Photo:  Zwiebackesser

During the COVID lockdowns of 2020-21, consumer spending fell drastically. Prices stagnated and in some countries even declined. But after the worst was over, consumer spending returned with a vengeance, creating supply shortages. Together with huge cash handouts in numerous countries to support people and businesses, and the effect of the Ukraine war on energy supplies, this is why inflation is resurgent for the first time in decades.

Economists are still investigating the persistence of this surge, but nobody expects records to be broken. While it is unquestionably hurting citizens, bankruptcies are unlikely for the most part. So why are people so worried?

It’s important to realise how economists measure inflation. They cost the typical basket of goods that a normal household would buy over a year, and compare it with the previous year. Some goods recur much more than others: for example, households typically buy many eggs each year but not many cars. If, though, a person buys a car worth £10,000 every ten years, economists assign a tenth of that outlay to the annual shopping basket – in other words, £1,000.

So despite appearing in larger quantities in the annual basket, everyday items affect inflation much less. You might buy milk worth £1 every other day, but this counts for less than, say, a mobile phone worth £1,000 bought every two years: £182 for the milk v £500 for the phone.

For this reason, economists (and central banks) worry less about the price of goods like milk, petrol or tomatoes than about big-ticket items. And increases in the prices of everyday items are often balanced out by drops in things like televisions or computers.

In contrast, when the average citizen sees prices of everyday items rising, they assume it represents a general rise in living costs. For example, when the euro was introduced, merchants tended to round up when translating prices from the old currencies. Shoppers would see milk climbing from, say, €0.90 equivalent to €1 in euros, and it felt like inflation was running at 11%.

But many overlooked the fact that TV sets only rose from, say, €499.50 to €500, which was just a 0.1% rise. Contrary to what people thought, overall eurozone inflation remained low.

To see if this idea would hold under proper research conditions, two colleagues and I designed and ran a novel experiment a few years ago. We invited 186 people to a computer lab, endowed them with a budget and asked them to buy a basket of virtual goods, over a number of imaginary years. We then asked them what the inflation rate was, and rewarded them in real US dollars for the accuracy of their estimations.

Our participants generally estimated well. However, in setups where they had to buy cheap goods frequently and the prices rose fast, they overestimated total inflation significantly. Equally, when the prices of such goods fell, they underestimated significantly. This showed conclusively that bias around frequent purchases leads to inflation misperception.

What this means today

How does this relate to the present, when prices really have been going up sharply? The same thing almost certainly applies, because frequently purchased goods have been rising especially fast. Take an everyday staple like your morning latte. In the EU, the price of coffee rose more than 15% in the year to August, milk more than 20% and sugar more than 30% – all way ahead of the 9% overall inflation level.

It’s similar across the board. Eurozone energy prices rose 30% in September year on year, and food, alcohol and tobacco more than 10%. Meanwhile, services and non-energy industrial goods rose only about 5%.

This helps to explain the heavy pressure for salary rises and votes to strike, even though goods going up fastest in price are often a relatively small part of people’s budgets. Even for the poorest households, for whom inflation is a bigger issue, energy bills only represent about 15% of their total spending.

Such misperceptions can hurt government popularity deeply. No wonder nations are responding with expensive and possibly harmful subsidies that still might not suffice. Populist leaders who have been elected by appealing to voters’ biases more than reason are likely to be especially vulnerable.

Inflation misperception also puts more pressure on central banks to raise interest rates to tackle inflation. Yet raising rates will only help with inflation driven by the demand side (government handouts) as opposed to by the supply side (global logistics, Russia), so it’s hard to know how effective this will be. Since the rate rises affect the cost of mortgages and other lending, they may do more harm than good.

This all highlights the need for people to be better educated about inflation. Clearly the media has an important role here, though these are deep-rooted biases that will be difficult to shift in the short term. The spectre of civil unrest is therefore likely to haunt the northern hemisphere in the months ahead, even though such protests are not entirely based on reality.