“The people who attack journalists don’t want objectivity; they want propaganda” – esteemed BBC journalist argues in defence of his trade during eloquent speech

BBC Presenter and Chief Correspondent Clive Myrie launched an impassioned defence of independent journalism during a speech at City, University of London this week, in front of a packed house of students, staff and members of the public.

In an era of creeping authoritarianism and state-sponsored propaganda in many states around the world, Myrie criticised leaders – such as Russian President Vladimir Putin – who sully the name of independent journalists with what they say and endanger their safety with the actions they endorse. 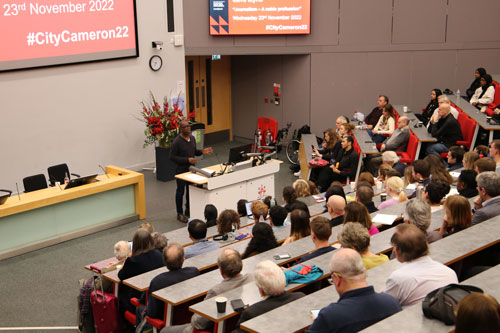 Posted to Ukraine to report in the days before (and after) war broke out – an experience that included needing to don a protective helmet midway through one live bulletin as the threat level visibly escalated – Myrie spoke of how he approached his reporting during that time.

"I wanted the truth to be heard – as best I could find out what the hell that was. That’s why I stayed.

“But what’s the best way to dissuade journalists from going to cover the war? You attack them. That’s precisely what President Putin’s troops have done."

"The war is designed to wipe out the Ukrainian people’s identity and to integrate them into Russia,” he said.

“The Russian propaganda machine would love the world to believe that this is all a Western plot. But independent journalists know otherwise – that’s why they’re banned in Russia."

"It's a world where more and more people, sadly, want their ideas and beliefs affirmed not challenged. The people who attack journalists don’t want objectivity; they want propaganda."

Over to the audience

Following a lengthy ovation for an impressive speech, Myrie sat down as Head of the Department of Journalism Professor Mel Bunce chaired a question-and-answer session.

Asked by a student about the diversity of programming at the BBC, Myrie said:

“It’s certainly got better than when I first joined the BBC. When I walked into the newsroom in around 1992, there were no Black people. But I didn’t feel out of place, I just felt if I could perform to the best of my ability that someone would notice.

“The BBC has made a concerted effort to right that wrong and has understood that it’s got to be more representative of the wider public in order to justify the licence fee – everybody pays it.

“That simple economic argument made the BBC understand, and the moral argument came as well.”

Prior to Myrie's lecture, he presented two recent winners of the Eric Robins Prize (awarded to a recent graduate in memory of Daily Mirror journalist Eric Robins before the Cameron Lecture each year) with their awards.

Clive Myrie has covered some of the most important news stories of the last 30 years including the wars in Ukraine, Kosovo, Afghanistan and Iraq. He’s reported on every US Presidential election since 1996, and has been the BBC’s Asia, Africa, Washington and Europe Correspondent. He’s the winner of several awards including four from the Royal Television Society. He has honorary degrees from the University of Sussex and the University of Staffordshire. He is also a Fellow of the Royal Television Society. In 2021, he became the host of BBC quiz show Mastermind.