When Music alumna Meliz Berg released a cookbook focused on comfort food, it shot straight to the top of the Sunday Times’ bestseller list 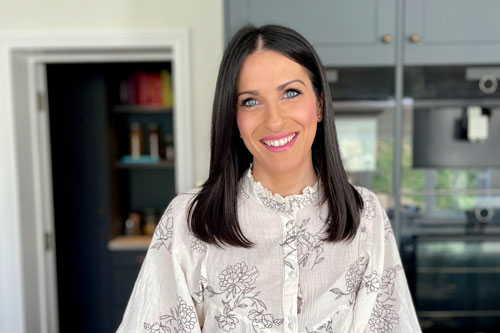 Meliz's recipes are influenced by both her Turkish-Cypriot and multicultural North London upbringing, featuring the Mediterranean, Balkan and Middle Eastern cuisines evident in Cyprus.

She is self-taught and aimed to bring her family recipes (previously only passed down in the oral tradition) to a wider audience through her platforms. Meliz’s Kitchen features both hand-selected recipes from her blog’s most popular posts to new exclusive ones, suitable “for busy family life”. It also contains vegan, vegetarian and gluten-free recipes.

Meliz [pictured] states that watching Delia Smith and reading her cookbooks as a child inspired her to want to write her own.

The book was written during lockdown while she home-schooled her children. Meliz self-styled her recipes and props, also shooting the food photography herself just as she does on her social media channels.

Meliz’s recipes have featured in Co-Op Food and Asda Good Living Magazine, as well as for Good Homes, Stylist and The Guardian, and she regularly works as a recipe developer and campaigner for Sainsbury’s. She also ran a ‘Cook for Syria’ Supper Club and two London pop-ups, and Meliz will be featuring at the Eat & Drink Stage at The Ideal Home Show in March 2023. She was also recently featured on This Morning to promote her book. The Happy Foodie calls the book “creative and refreshing”.

At City, Meliz studied for a Bachelor of Music (BMus), graduating in 2005, followed by a master’s in Music. While studying, Meliz became one of ten contestants performing on Andrew Lloyd Webber’s TV programme How Do You Solve A Problem Like Maria?, which sought an ideal candidate for the lead role in The Sound of Music at The London Palladium. Meliz sang ‘Son of a Preacher Man’, ‘The Voice Within’ and ‘Girls Just Wanna Have Fun’ as solos and performed ‘Another Suitcase in Another Hall’ and ‘Take That Look Off Your Face’ as duets. She reached the third round before being eliminated, leading a rendition of ‘So Long, Farewell’ as was customary for leavers. Afterwards, she spent eight years teaching music at secondary level.

City caught up with Meliz for a chat about her book and her time studying here.

How pleased are you with the book’s success and has it taken you by surprise at all?
I am absolutely thrilled with the success of the book and the reception it has had since its publication date – to be an instant No1 Sunday Times Bestseller left me completely flabbergasted.

What is it about this type of cooking that is appealing to so many people at this moment?
Turkish-Cypriot cuisine is comforting and family-friendly, much like the Turkish-Cypriot people and culture, and the recipes use mainly economic, easily sourced ingredients that can now be found in most mainstream supermarkets. There are quick and easy recipes to suit busy midweek lifestyles, and traditional recipes that are perfect for lazy weekend afternoons; most of the recipes can be frozen and easily adapted to feed two or 22, and there are also recipes that can be prepared in advance, which is extremely handy if you are entertaining but don't want to be stuck in the kitchen when your guests are all having a great time together.

What’s next for you?
I'll just continue to do what I do, sharing my love of good food (always with an accompanying soundtrack of my favourite songs) and riding this fun, unpredictable wave – I'm so grateful for the support I've had and to everyone who has bought my book.

"I love seeing my recipes being recreated in other peoples' kitchens."

Any favourite memories of your time at City?
Oh, so many – I loved my time at City, and I really did make the most of my time there, both academically and socially. I thoroughly enjoyed conducting the research for my BMus and master’s dissertations, during which Steve Stanton and Laudan Nooshin were fantastic mentors. My happiest memories were due to the friendships I made, and the musical opportunities that arose from these, especially with Atar Shafighian and Russ Hayes.