City hosts this annual symposium to understand and support the needs of people with aphasia, a language disorder caused by brain injury, and commonly stroke.

Last week, the Department of Language and Communication Science at City, University of London was delighted to host the Therapy Symposium 2022 of The British Aphasiology Society (BAS).

Aphasia is a complex language disorder, caused by brain injury such as stroke, cancer, head trauma or brain tumour. Some 350,000 people live with aphasia in the UK.

Aphasia is caused by damage to the language centres in the brain, and can affect the ability to understand, talk, read and write.

The annual Therapy Symposium was held online (Zoom) this year on the 1st and 2nd of September, with attending delegates required to be a member of BAS.

The symposium offered delegates the opportunity to learn about clinically relevant research and contemporary clinical practice in a variety of formats including posters, lightning talks, standard and longer presentations, later allowing for more detailed discussion of new aphasia treatments, with online discussion actively encouraged and supported.

Dr Abi Roper, Speech and Language Technologist and Research Fellow at City, University of London, delivered her keynote speech, ‘Technology innovations in Aphasia’ on the first day of the symposium. She said in part: 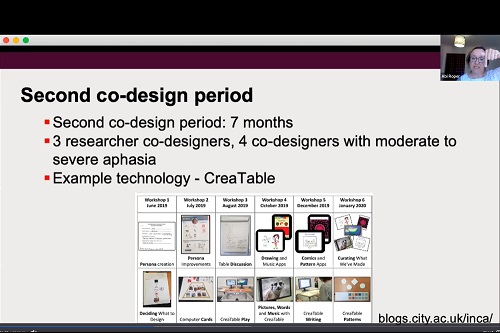 She continued on to share how co-creation of research with people with aphasia has been at the heart of the projects she has been involved in, including the GeST, EVA Park and INCA projects, all joint collaborations between the Centre for Language and Communication Sciences and the Centre for Human-Computer Interaction Design (HCID) at City.

On the second day of the conference, the keynote speech was delivered by Dr Sarah Northcott, Senior Lecturer at the Department of Language and Communications Science, and entitled ‘Psychological wellbeing after stroke and aphasia: what we can all do to help’.

“Today I’m going to cover four things in this talk, the first thing I want to explore is: why think about psychological wellbeing at all, is it important? What is the speech and language therapy role in this? And then touch on intervention research, and give some ideas and suggestions of what we can all do to support the psychological wellbeing of people with stroke and aphasia"

She also commented on the incidence of depression in stroke and aphasia:

We know that having a stroke is really hard and turns someone’s life upside down, and we know that rates of depression are high after a stroke. So around a third of people who have a stroke will experience depression, and this persists even to the long term. Studies looking at ten-years post stroke are still finding a third of people are depressed.

“And what about people with aphasia? Often people with aphasia are excluded from mental health research. In so far as they are included, a recent review estimated that between 43 to 70% with aphasia experienced depression. And in Zanella’s study they found that people with aphasia were 7.5 times more like to be depressed than people who had a stroke and didn’t have aphasia. So there seems to be something about having aphasia that makes people particularly vulnerable to being depressed." 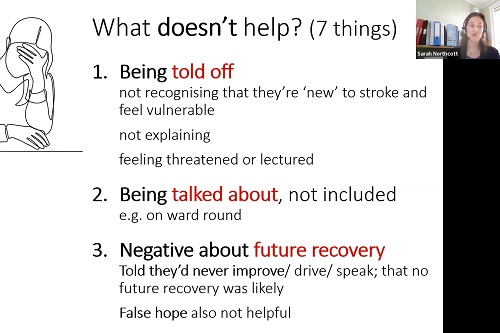 She later talked about the research she has been working on aiming to help wellbeing, namely the ‘Solution Focused Brief Therapy for people living with aphasia’ (SOFIA) study and the new ‘Training Healthcare professional to support the Emotions of People with Aphasia’ (THEA) study, for which she received Participatory Research Funding from Research England earlier this year.

Read the full schedule of speakers and talks at the symposium.