The term “emotional labour” is applied to an array of home-based activities — from keeping mental to-do lists, to remembering to call your in-laws on their birthdays. Some advocate the need to teach boys emotional labour, or identify it as the unpaid jobs men still don’t understand.

But that’s not what emotional labour is, according to the sociologist who coined the term in 1983, in her book The Managed Heart: Commercialization of Human Feeling.

For Arlie Russell Hochschild, emotional labour is emotion work (the management of human feeling) performed in exchange for pay and as a condition of employment.

What is regularly called emotional labour – the (unpaid) emotional management we do in our private lives, such as parenting and personal relationships – is actually emotion work, but shouldn’t be defined as emotional labour.

What is emotional labour?

Emotional labour is precisely defined by Hochschild as “the management of feeling to create a publicly observable facial and bodily display [that is] sold for a wage”. In 1983, she estimated that close to one-third of all jobs in the United States possessed elements of emotional labour, disproportionately impacting women working in the service sector.

Hochschild’s analysis was informed by participant observation, interviews and informal discussions with a range of employees in the airline industry. Emotional labour, she says, is only applicable to jobs where a worker is required to perform feelings and create emotion in others while engaging in work.

She explains that emotional labour is typically about attempting to feel the right feeling for the job. Examples include a flight attendant creating a calm atmosphere, a secretary facilitating a cheerful office, a waiter promoting a pleasant dining experience, or a funeral director making the bereaved feel understood.

A young businessman said to a flight attendant, “Why aren’t you smiling?” She put her tray back on the food cart, looked him in the eye, and said, “I’ll tell you what. You smile first, then I’ll smile.” The businessman smiled at her. “Good,” she replied. “Now freeze, and hold that for fifteen hours.” Then she walked away. In one stroke, the heroine not only asserted a personal right to her facial expressions but also reversed the roles in the company script by placing the mask on a member of the audience.

Emotional labour demands workers not merely manage their own emotions, but adopt systems to manage the flow of emotions and exchange between workers and customers. As Hochschild argues, the flight attendant is required to be nicer than might be considered natural.

Conversely, the bill collector is expected to be harsher, to inspire fear in their clients. In both cases, the employee is expected to produce a feeling in the consumer to satisfy company demands.

It is this attempt to manage the emotional system within public life – and specifically, in commercial contexts – that constitutes emotional labour.

The concept symbolises a shift from the uses of emotion in the private sphere to its application to commercial contexts; what Hochschild calls a “transmutation” that is achieved through the emotion work, feeling rules, and social exchange that make up the basis of emotional life.

Emotion work and feeling rules originate in the private domain. But emotional labour brings them into commercial contexts, where their performance and management are made into a product.

As Hochschild stated in a recent interview, the now-common use of the term she coined risks broadening its meaning so loosely as to render it meaningless:

It is being used to apply to a wider and wider range of experiences and acts. It’s being used, for example, to refer to the enacting of to-do lists in daily life  — pick up the laundry, shop for potatoes, that kind of thing. Which I think is an overextension. It’s also being applied to perfectionism: you’ve absolutely got to do the perfect Christmas holiday. And that can be a confusion and an overextension. 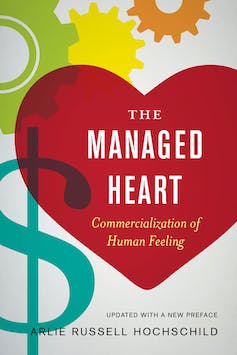 Almost 40 years since its original publication in 1983, it is fitting to revisit The Managed Heart, which arguably ranks as one of the most important contemporary sociological texts.

The Managed Heart, which established Hochschild as a public sociologist, is perhaps her most enduring contribution. It examines the cost of employment conditions in contemporary capitalist, post-industrial societies characterised by the expansion of the service sector.

As Hochschild explains in the opening of the book, her quest was to consider —following Marx’s interest in the conditions of employment — the human cost of becoming an instrument of labour.

She turned to the airline industry and specifically the experience of flight attendants in managing their emotions at work. She also drew on bill collectors as another illustrative case study.

The costs of emotional labour

Hochschild found that as commercial interests lay claim to a worker’s emotional life, that worker becomes vulnerable to alienation from aspects of themselves and their work.

The flight attendants interviewed by Hochschild often spoke of their smiles as being on them but not of them and found it difficult to come down after work from their artificial elation, born of needing to continually enhance the customer’s status through acting as if the cabin is the customer’s home.

Workers also manage this demand by separating out themselves from the job. Workers who clearly segregate themselves from their jobs are less likely to suffer burnout, but risk estrangement from themselves. They can become cynical about the requirement to act and perform.

While taxing the worker, this form of labour enables a version of public life where many people – we as customers – experience trusting and pleasant transactions with total strangers, on a daily basis.

But the costs of performing emotional labour show how important it is to use the concept correctly. By overextending the concept, we risk devaluing it – or worse, rendering the type of labour it describes less visible.

And this undercuts a key contribution provided by Hochschild’s book: making visible the struggles that this labour imposes on the worker. Struggles that were, up until then, largely invisible or seldom recognised.