By Dr Jimena Valdez, Lecturer in Comparative Politics at City, University of London

Uber has had a controversial history since its founding in 2009, from violent conflicts among drivers to a secret software allegedly used to evade law enforcement. Now, a leak of over 124,000 documents dubbed the Uber files shows the extent to which the firm under co-founder and former CEO Travis Kalanick capitalised on that chaos to expand across 40 countries.

My research explores the relationship between Uber and the state. The company’s strategy to grow at all costs has been uneven, shaped and slowed by varying regulations in different markets. In recent years, Uber appears to have toned down its approach and stop some of the more aggressive activity detailed in the leaks. But in my view, the strategy at the heart of the company’s success means it will always be in battle with the laws where it operates.

The Uber files reportedly show the company had a deliberate strategy of breaking or ignoring the law and was very much aware of it. Uber’s original service – citizens driving other citizens in their private cars without permits or licenses of any kind – was mostly in a grey legal area. In emails, executives joked about being “pirates” and the company’s model being “just f***ing illegal”, when it faced legal opposition in entering new markets.

The leaked documents also reveal the role that lobbying and relationships with friendly politicians played in Uber’s success. The company hired powerful lobbyists, many of them former members or associates of national governments who promised to end revolving doors between politics and industry. Meetings with politicians included figures like France’s then-economy minister (and now president) Emmanuel Macron and then-mayor of Hamburg (and now chancellor of Germany) Olaf Scholz.

Embracing the chaos also allegedly included endangering the company’s drivers. Almost wherever Uber landed, taxi unions organised protests that could sometimes turn violent. Messages in the Uber files show that Kalanick considered that Uber drivers going to a taxi drivers’ protest in France was “worth it” as “violence guarantee[s] success”. 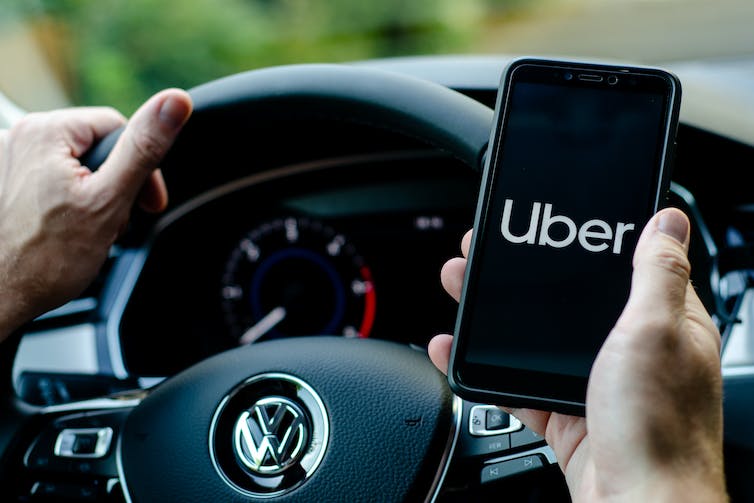 Uber also allegedly had in place a “kill switch”, a technological tool to prevent authorities from accessing Uber’s data when they raided its offices.

The company has made an effort to distance itself from the allegations in the Uber files. A statement issued by the company attributes the content of the leaks to the Kalanick era, and stresses the change in leadership and values.

Meanwhile, Kalanick’s spokesperson has said that Uber’s approach to expansion was not his own doing, but was instead “under the direct oversight and with the full approval of Uber’s robust legal, policy, and compliance groups”.

What has (and hasn’t) changed

This chaos strategy arguably worked. Uber is now a US$43 billion (£36 billion) company, and its drivers make around 19 million journeys a day. Yet, it still struggles with profitability and aggressive competitors.

In 2017, Kalanick stepped down and was replaced as CEO by Dara Khosrowshahi. Most of the leadership has also changed since then. Accusations about a workplace culture of harassment and sexism appear to have dried up.

The company has generally moved away from its original service towards one where licensed drivers use vehicles with specific permits to hail passengers (in other words, a taxi for the smartphone era), and introduced a food delivery wing, Uber Eats. It has also taken a calmer and more polite approach to expansion —- moving slower, breaking less stuff.

Let me give you two examples: Uber entered Madrid in 2014 in disregard of a Spanish law requiring companies and drivers to have a specific license. It entered Berlin the same year, in violation of German competition laws. The company was banned, left both cities and returned later in compliance with existing regulations.

When addressing the German expansion in 2018, Khosrowshahi admitted that Uber’s approach had backfired, and pledged to grow responsibly. Similarly, in talking about the experience in Spain, Carles Lloret, Uber’s CEO for southern Europe, acknowledged that “it was a mistake to replicate the American model – more liberal – without taking into consideration the Spanish context”.

And yet, some things have stayed the same. The company faces multiple lawsuits, most of them around whether its workers are classed as employees, and its profitability remains an open question. As I explain in my research, these two things can be explained by the company’s fundamental strategy: that of “contentious compliance”.

Uber adapts to existing rules, but only as little as necessary to provide its services. Meanwhile, it continues to fight legislation everywhere – spending billions on lobbying and in crafting political connections – to push existing rules closer to its preferences.

Uber’s executives know their business model might not be sustainable, and even less so if they are forced to classify workers as employees and pay for related rights and benefits. Fighting regulations is a survival strategy.

They have a preferred model in mind – as close as possible to their original one. Though they are not openly breaking laws anymore, they continue to push for their preferred regulations through the courts or by finding legal loopholes.

In a memo recently sent to employees and leaked to the press Khosrowshahi wrote: “We will be even more hardcore about costs across the board.” The company knows that if it is forced to re-classify drivers as workers (as, for example, the UK supreme court has ruled) the financial situation will be even worse.

Beyond another stain in its reputation, Uber has very real problems. Profitability might be the most urgent one for the company, but for our society there is a far more important one.

Apps like Uber and the hundreds that followed promised innovation. Instead, they have brought a barely-disguised version of the exploitation and corruption that has always characterised capitalism. Given the allegations in the Uber files, one also has to wonder if there will ever be consequences for tech entrepreneurs with a taste for rule breaking.

Dr Jimena Valdez is a Lecturer at the Department of International Politics at City, University of London. She studies the organisation of capital and labour. Her research focuses on what business and workers want, and how they get it. Click here to read more about Dr Valdez's research in this field: 'The politics of Uber'