City’s LUNA team share key findings of the project aiming to help people with the language disorder aphasia by allowing them to share and retell stories about their lives in different ways.

Aphasia is a complex language disorder caused by brain injury, most commonly stroke, and it is believed that some 350,000 people live with aphasia in the UK today.

People with aphasia have difficulty producing language and understanding language, and can face a wide range of difficulties including job loss, social isolation, and stigma in part due to the ‘hidden’ nature of the disorder.

Led by Dr Lucy Dipper, and Dr Madeline Cruice of the Centre for Language and Communication Sciences Research at City, University of London, the Linguistic Underpinnings of Narrative in Aphasia (LUNA) project is a study of a novel discourse treatment for aphasia using personal narratives; meaning it is a study about people with aphasia telling their own personal stories. 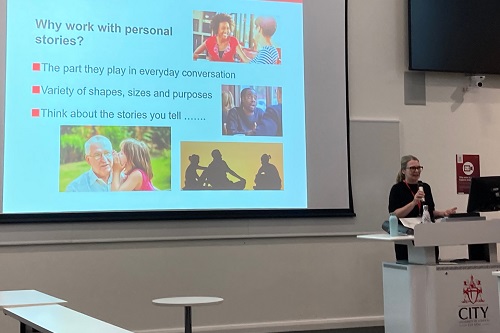 The four-year feasibility project researched an integrated, personalised therapy targeted at the word, sentence, and discourse (connected speech) abilities of people with aphasia. It provided them with flexible tools for improving their confidence and ability to express themselves through narratives that reflect who they really are, and employed metrics to measure how well these goals were achieved.

As the project has come to its conclusion, the project team held a special ‘hybrid’ in-person/online event last week to share what had been learned over the last four years, and with a broad audience, including people with aphasia, clinical and academic colleagues and other interested parties based across the globe.

As a ‘feasibility study’ this stage of the LUNA work was designed in such a way to show that a larger, more comprehensive study could be implemented that may provide definitive answers to how well the therapy works. Meaning, that findings at this stage are still preliminary.

Dr Madeline Cruice, Reader at the Department of Language and Communication Science at City, began the event by explaining the burden of aphasia on people in the UK, and how the concept for the research had come about.

She also explained how, throughout the event, the audience would be able to ask online questions which could be shared with the speakers on the fly and also saved for a Question and Answers session at the end of the talks. 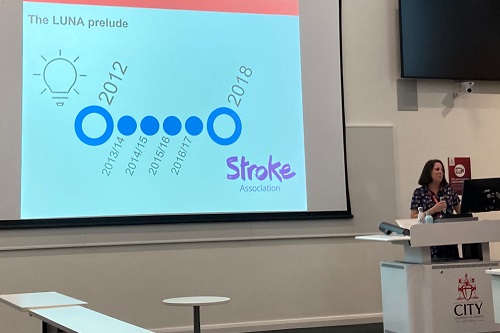 Dr Lucy Dipper, Department Lead, Department of Language and Communication Science at City went on to explain how funding from the UK’s Stroke Association allowed her team to develop and deliver their initial work into the LUNA project. She also dug deep into some of the technical aspects of the research to inform, in particular, the academic and clinical members of the audience. 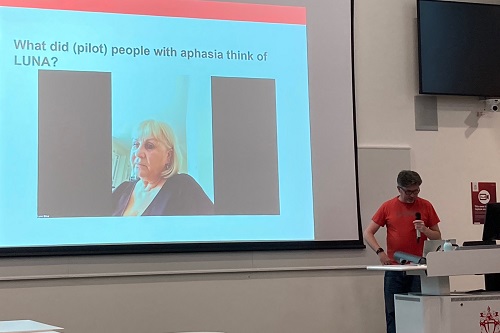 Jan Bannister has aphasia and co-designed the LUNA therapy, and has worked with the academic team for eight years. He shared how the therapy had become a ‘game-changer’ for him in his ability to find the means to express himself.

Dr Cruice shared that the LUNA study achieved its aims and provided good evidence that it benefitted the discourse and language abilities of people with aphasia, and which could justify a larger study with more participants.

During the Question and Answer session the academics were asked how the COVID-19 pandemic affected therapy and the research given that it all had to be delivered online rather than in person. Responding to the question, Dr Cruice said:

A lot of people I think, at the end of the day were very reasonable. They kind of said, ‘hey, there’s nothing else going on at the moment, we’re in lockdown’.  There are also marvellous opportunities that come [from remote working], because you literally turn your computer on for a ten o’clock start, your therapist or student are there and away you go. There are no travel issues or concerns about getting around London, or wherever it is. So there are lots of barriers that are removed.

But people did say in part of the data that they missed a little bit of that quickness of sorting some things out on the table top, because everything was through the online interface.

“It was fantastic that we had over 140 people attend online and in person, with great questions from the audience and feedback from those who attended. It was particularly fabulous to have Lynn, Varinder, Jan and Steve  - the people with aphasia who co-produced LUNA with us – in the room. Really looking forward to taking the research on to the next stage.”

Visit the Centre for Language and Communication Sciences Research at City, University of London