By Dr Aldo Zammit Borda, Reader in Law in The City Law School 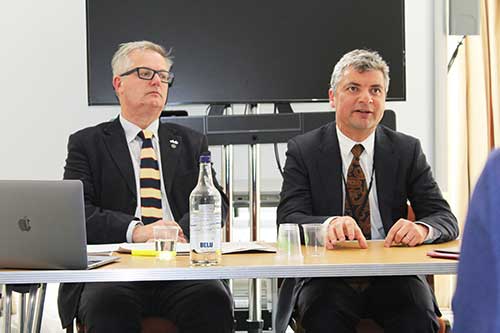 (L to R) The Chair of the APPG on the Yazidis, Mr Brendan O'Hara MP and Dr Aldo Zammit Borda at the meeting on  the Yazidis in the UK Parliament on 20th April 2022

Since August 2016, Turkey has conducted, through its own armed forces and together with Turkish-backed non-state armed groups, military operations and airstrikes in and against northern Syria and northern Iraq.

There is mounting evidence that Turkey, as part of its military operations, has targeted and/or conducted indiscriminate attacks, including airstrikes, against Yazidi civilians and civilian objects in northern Iraq.

Of particular concern is evidence of indiscriminate attacks that Turkey has conducted against the UN-sponsored Makhmour refugee camp, in which several Yazidi civilians have sought refuge, on 14th June 2020, and 5th June, 3rd September and 2nd February 2022.

There is also evidence that Turkey conducted airstrikes against the Sikeniye Medical Clinic, one of the very few medical facilities in the area that offered medical services to Yazidi civilians, on 17 August 2021.

The Yazidis are a small religious minority residing in parts of northern Iraq and Syria. They gained prominence in August 2014, when they were specifically targeted by ISIS/Daesh for extermination, on account of their religious beliefs. The Yazidis were treated brutally by ISIS fighters, with many men being killed and women and girls being taken into sexual slavery. In 2018, a Yazidi woman, Nadia Murad, won the Nobel Peace Prize for her role in highlighting the plight of the Yazidis to the world and for her efforts to end the use of sexual violence as a weapon of war.

As a direct result of the genocide that the Yazidis suffered at the hands of ISIS/Daesh, many lost their homes and became internally displaced, seeking refuge in refugee camps where they continue to live. It is for this reason that Turkey’s unprovoked airstrikes against these refugee camps and civilian medical facilities are a matter of concern and constitute a breach of international human rights law and/or international humanitarian law. Turkey has justified these attacks as being necessary for counter-terrorism. However, there is no evidence that Yazidis have participated in any terrorist-related activity and Turkey’s indiscriminate attacks against Yazidi civilians and civilian objects are therefore unlawful.

I am currently a Reader in The City Law School and an expert in international criminal justice. I have also worked alongside human rights NGO, Accountability Unit, to support a study that provides a factual and legal assessment of the Turkish airstrikes on Yazidis in northern Iraq. The study was undertaken by barristers Mr Aarif Abraham from Garden Court North Chambers and Dr Tatyana Eatwell from Doughty Street Chambers.

With generous financial assistance from City, University of London’s Policy Support Fund, the findings of this study were presented to the All-Party Parliamentary Group (APPG) on the Yazidis, at a special meeting that took place in Parliament on 20th April 2022. Representatives from the APPG on International Freedom of Religion or Belief, the APPG on Genocide, and APPG on Iraq also attended this meeting.

During the meeting, the Chair of the APPG on the Yazidis, Mr Brendan O'Hara MP, welcomed the study and stated that the APPG will consider its findings in future discussions.