Recent wildfires in Turkey have destroyed more than 95,000 hectares of its coastal forestland and divided the country further into its political colours. Dr Orkun Saka from City’s Department of Economics discusses the implications of the recent stand-off between central and local governments and explores how the costs of political misalignment may affect banks’ lending practices in the country

As possibly one of the most worrying signs of climate change, unprecedented wildfires have erupted in several Mediterranean countries in the last few weeks, devastating the forestland of many coastal cities in Turkey and Greece. The fires have ravaged homes and businesses, in addition to killing many farmers’ livestock and perishing perhaps even more wild animals amidst temperatures estimated to have reached 200C.

However, not only did these forest fires fail to create solidarity among Turkish people, the Turkish government’s seemingly passive stance created suspicions that the current ruling party (i.e., Justice and Development Party, or AKP) may have been intentionally slow in its response leaving the provincial municipalities alone to deal with the fires. In most cities, volunteers flocked from other parts of the country to help local authorities with quenching the massive fires, while the country’s president, Recep Tayyip Erdoğan, was tossing tea packages from his bus at residents in the affected towns. Later, during a live TV interview, Erdoğan put the blame for failing to stop the fires on the mayors of Mugla, Antalya, and Aydin provinces, all of whom belong to the opposition parties.

A closer look into the local election histories of these three cities (alongside others) indeed provides an interesting picture. Figure 1 shows the election performance of the AKP mayors throughout all local metropolitan elections since the party came to power in 2002. In general, the electoral competition has heightened over time, as illustrated by the more intense shading in both AKP-held and opposition provinces. Nevertheless, much of this rise in competition comes from coastal provinces in the southwest part of the country and has occurred while the ruling party consistently dominated the national politics via its repeated successes in general elections.

The lighter areas in the lower left corners of the maps in Figure 1 correspond to Aydin, Mugla, and Antalya provinces that have been severely affected by the recent forest fires and whose mayors’ requests for help have seemingly been neglected by the central government authorities. In particular, Antalya province is the only one that has changed its political colour in each of the past four local elections switching between AKP and opposition back and forth. It is currently governed by an opposition mayor. Thus, it’s natural to ask how much the geographical distribution of central government resources (fiscal or otherwise, such as sending planes to help stop forest fires) may depend on the political competition in these provinces and—more importantly—on their current political colour. This naturally begs the question: Is Turkey’s central government favouring the regions governed by its allies and punishing others?

Push for allies and curb for opponents

In a forthcoming academic paper, I and my co-author, Cagatay Bircan from EBRD, study the presence and consequences of such political influences in the context of state-bank loans in Turkey. Comparing their behaviour to the private ones, we focus on state banks that are more prone to political interference and operate via branch networks across the entire country. In our methodology, we use variation across provinces in political competition faced by the ruling party during local elections (similar to Figure 1), as well as a new quarterly dataset of bank loans, to pin down the exact timing of politically induced lending.

Source: Author’s calculations based on Bircan and Saka (forthcoming). Notes: Panels A, B, C and D show the win/loss margins for the ruling party (i.e., AKP) in 2004, 2009, 2014 and 2019 local metropolitan elections, respectively. Politically aligned provinces are in shades of yellow and non-aligned provinces are in shades of gray. The lighter areas correspond to Aydin, Mugla and Antalya provinces that have been severely affected by the recent forest fires in Turkey.

We document two sets of findings. First, state banks engage in strategic lending around local elections when compared with private banks. In contrast to earlier literature, we find that state banks curb aggregate credit in the country prior to local elections and increase it afterward. However, this result is driven by cross-sectional reallocation of credit between constituencies defined by their political alignment and the degree of electoral competition.

In particular, state banks in Turkey, when compared with privately-owned banks, lend more in provinces where the incumbent mayor is affiliated with the ruling party and faces strong political competition from opponents in the run-up to local elections. In contrast, the very same state banks instead decrease their lending in similarly competitive provinces but with an incumbent mayor from an opposition party, such as the current situation in Antalya (see Figure 2). 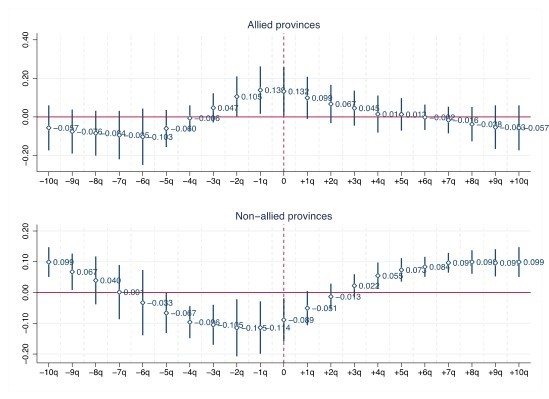 Both effects, the relative increase in state-bank credit in allied regions as well as the decrease in opposition regions, arise only prior to the dates of local elections and peak either on the exact election quarter or one quarter earlier before quickly dissipating after the election. This lends support to theories of tactical redistribution, which predict that governments use public resources (in this case, lending by state-owned banks) as a strategic tool for re-election purposes.

Consistent with the argument that local politicians are usually judged by local economic performance, we find that the credit cycle is mainly driven by corporate lending, while it does not appear in consumer credit. This is consistent with the idea that voters, who have imperfect information about the drivers of economic growth, attribute fluctuations in economic performance mainly to the incumbent mayors. Thus, our findings suggest that, by strategically redistributing corporate credit prior to elections, politicians indirectly target the creation of jobs and investment to increase the electoral chances of their own mayoral candidates.

These systematic divergences in lending practices across provinces imply that governments may exert influence over state-owned banks to shape the geographical distribution of credit in line with the ruling party’s objectives. This reallocation may have real consequences if borrowers are unable to switch lenders, meaning that politically induced lending might alleviate credit constraints in aligned provinces and exacerbate them in non-aligned provinces.

Our study goes on to illustrate in detail how state-bank-dependent industries economically suffer in opposition areas and we quantify the distortions in the efficient allocation of bank credit as well as assess their impact on aggregate productivity in the country. We also find evidence that voters respond to the changes in economic activity, especially in terms of manufacturing employment in the run-up to local elections. This implies that, despite the distortionary effects of the lending cycle, such policies may resonate well with electorates in the short term.

These findings have important implications not only for the role of state ownership in banking but also for the fair distribution of national resources (including those to fend off wildfires) in countries like Turkey where the local governors may not be sufficiently powerful in economic terms and thus have to depend on the central government in most cases. If the central government consistently favours the regions governed by a close ally and punishes the others, these distortionary effects may increase economic inequality and create structural divergences across regions with different political preferences. In the absence of appropriate checks and balances in such countries, carrying the wrong political colour may cost firms their access to finance, if not burn people’s lives and livelihoods.

This article was originally published on Promarket.org and is republished here with kind permission. You can read the original article here.