Dr Sarah Northcott, Senior Lecturuer at the Department of Language and Communication Science at City, writes in The Conversation UK about her Solution-Focused Brief Therapy (SOFIA) research for people with aphasia.

Around 25% of adults will have a stroke in their lifetime. And around one-third of stroke survivors will be left with damage to the part of their brain that decodes and organises language – leaving them with a disability known as aphasia . Aphasia can affect speaking and understanding as well as reading and writing abilities, but does not affect intelligence. It can vary in severity from getting a few words mixed up, to being unable to say any words. 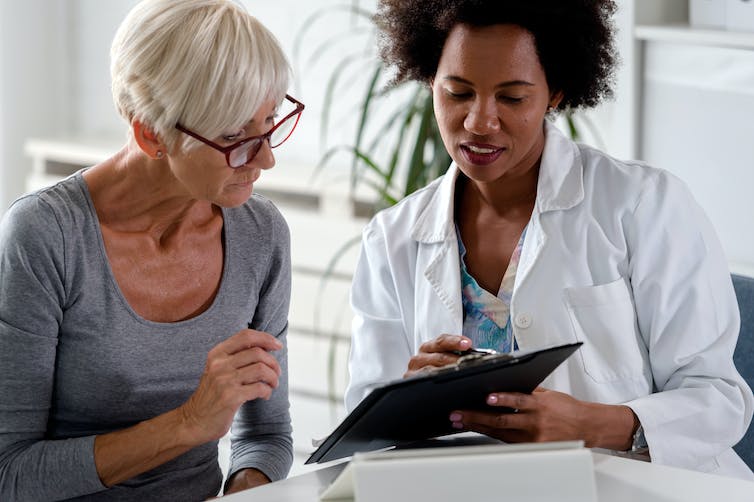 Aphasia can be a difficult and frustrating disability to live with, and can disrupt many aspects of a person’s life – including relationships, holding down a job, and social activities. As such, depression is common, affecting an estimated two-thirds of people with aphasia. Yet many people with aphasia struggle to access the psychological support they need – psychological therapies, or “talk therapies”, can feel inaccessible to someone with a language disability.

The therapy that we delivered to our research participants was adapted from a form of psychological therapy called “solution-focused brief therapy”. This form of therapy supports a person in building meaningful change in their everyday lives. It invites people to describe their hopes for the future, and explores their skills, talents and resources to support them in when adapting to their new circumstances. It also gives them a chance to discuss their experiences and thoughts.

Thirty people with post-stroke aphasia received the therapy in our study. Fourteen of our participants had severe aphasia, while 16 had milder aphasia. They were all at least six months post-stroke – and some were as many as 12 years post-stroke. Participants were offered up to six therapy sessions, each of about an hour, spaced over three months. The therapy was delivered by speech and language therapists who had received specific training and supervision from experts in solution-focused brief therapy.

To make the therapy accessible, we made sure that the therapists worked closely with participants to help them communicate their thoughts and feelings, using whatever method they could – so as well as talking, participants communicated through drawing, gestures, pictures, objects, mime, or writing key words. Although their intelligence was not affected, many participants found it harder to understand language when spoken rapidly.

To support participants’ understanding, therapists used simpler language, slowed their pace of speech and supported communication visually such as by writing key words, or using gestures or pictures. Above all, the therapists gave people time – time to express their thoughts and time to process what the therapist was saying.

Therapists encouraged participants to describe what “living well” with their aphasia meant to them. They invited participants to notice small signs of progress and share their successes and achievements with the therapist. These could be seemingly small events, such as making porridge with one hand for the first time, and also profound conversations around how they experienced aphasia, their early times in hospital, or describing the process of recovery and adjusting to their stroke. The therapists invited them to notice their own skills and the resources that they had drawn on, and how they could use these to help them continue to adjust to their new circumstances.

Our participants agreed that the therapy worked well for people with aphasia – and that it was important for them (and others with aphasia) to have access to psychological support if needed. Many valued being able to talk about their hopes and achievements, and share how they found living with stroke and aphasia. They also valued the companionship and connection they felt with their therapist.

Many participants also described experiencing positive changes in their life after attending therapy – including having the confidence to start using the phone again, doing things they used to do such as cooking dinner, or starting a volunteer role. For some, it gave them courage, and let them feel more like themselves again.

Our research shows that even people with a severe language disability can benefit from this therapy when it is adapted specifically for them. A challenge is ensuring that mental health professionals and speech and language therapists have the training, skills and confidence to provide appropriate psychological support for people with aphasia.

There are around 350,000 people living with aphasia in the UK. Yet public awareness of the condition remains low, making it a poorly understood and often lonely disability to live with. If we give people with aphasia the time to express themselves – noticing and valuing them as people, and not just seeing their disability – it can make a real difference in improving their lives.

Support for people living with aphasia in the UK can be found at The Stroke Association and aphasia charities such as Aphasia Re-Connect.

This article is republished from The Conversation under a Creative Commons license. Read the original article.