The City Law School alumna impresses judges with her essay regarding the Law Commission’s latest proposals to expand the range of digital sexual crimes in the UK. 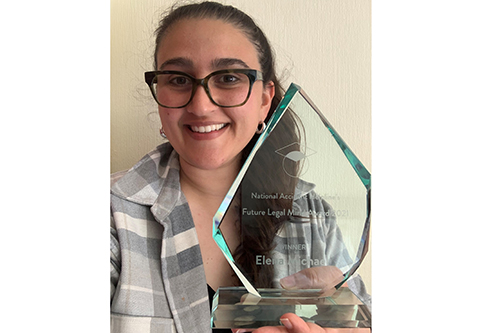 Entrants to the law essay competition were asked to tell the judging panel: Why they chose to study the area of law they were most passionate about; and, which area of the law or UK legal system they thought was broken and required urgent reform.

She now plans on developing this campaign over the course of the next year. She then hopes to travel to the U.S. to do an LLM before pursuing a PhD in digital sexual crimes and going on to apply for pupillage. She also runs her own consultancy for children whose studies are impacted by their mental health and works as an Applied Behaviour Analysis (ABA) therapy administrator for children.

The 26-year-old will receive a £2,000 prize fund to help further her career and mentoring with experienced lawyers from National Accident Helpline.

“It took me several days to process the news that I’d won. Having followed the competition for the last two years, I’d not felt brave enough to apply before. I really love what the Award stands for in celebrating those starting out in the profession and appreciating our potential to innovate. Entering the competition was a way for me to feel more empowered and confident in my chosen path to the Bar.”

Will Herbertson, Marketing and Strategy Director at NAHL Group, said:

Future Legal Mind is in its seventh year and has seen past winners go on to become solicitors and barristers.