The City Law School’s Dr Jonatan Echebarria Fernández, explains why Northern Ireland-based businesses who have historically shipped their goods through Dublin are now opting to do so via Scotland.

Brexit has given rise to a change in the way Northern Ireland-based businesses are shipping their goods.

Businesses in this part of the United Kingdom are now opting to ship their cargo through ports in Scotland instead of Dublin.

Maritime law expert in The City Law School, Dr Jonatan Echebarria Fernández, says that a major reason for the change has to do with the EU-UK Trade and Cooperation Agreement’s (TCA) Northern Ireland Protocol, which has been in force since 1 January 2021.

The Protocol establishes border checks for products arriving from Great Britain to Norther Ireland. However, a three-month grace period has been granted for food reaching Northern Ireland supermarkets, and six months for certain meat products.

Seaborne trade is performing better than in January 2021. While shipments have gradually recovered after the low post-Christmas trade levels recorded in most British ports, trade between Scotland and Northern Ireland has proportionally increased, compared to the 50% decline registered between Wales and the Republic of Ireland.

He adds that the path towards a recovery is "based on a shift in trade patterns and trade flows, but hindered by the legal changes brought by the TCA.”

Dr Echebarria Fernández is the author of the recently published book, Jurisdiction and Arbitration Agreements in Contracts for the Carriage of Goods by Sea: Limitations on Party Autonomy (Informa Law from Routledge). He teaches Commercial Law and Contract Law modules on the LLP programme alongside International Trade Law and Carriage of Goods by Sea modules on the LLM degree programme. He has previously taught Maritime Law, EU Law, International Commercial Law and International Business Law at the Copenhagen Business School (CBS). 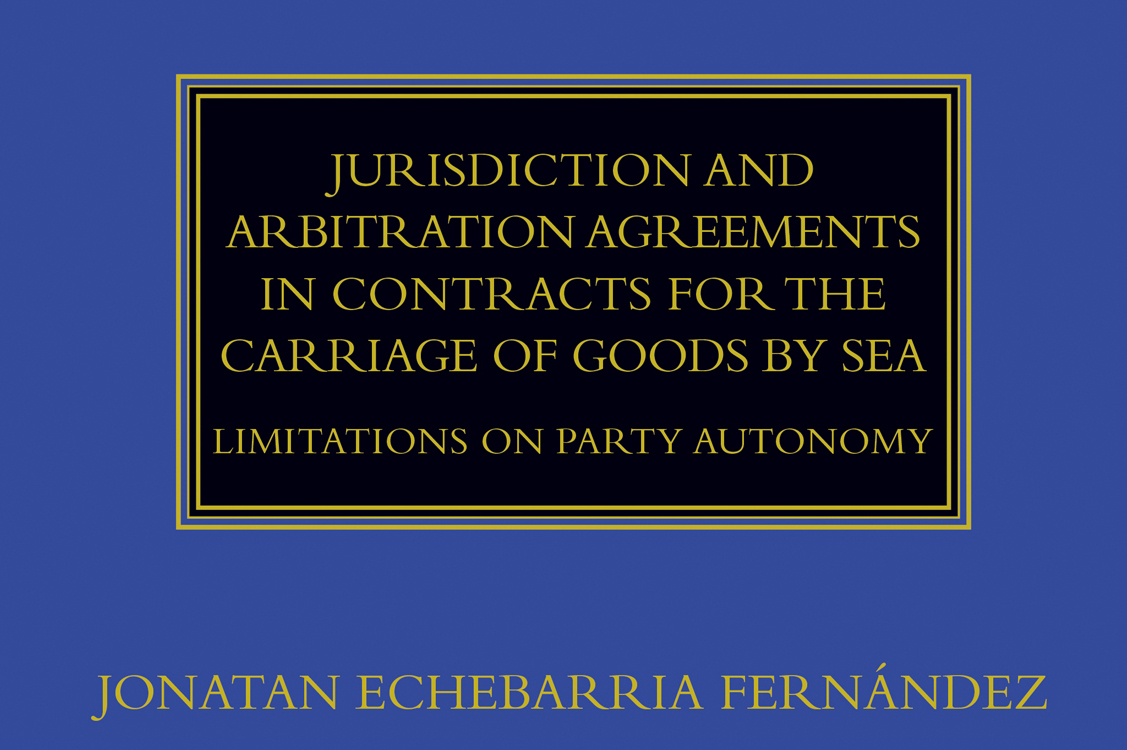 His new book focuses on party autonomy and its limitations in relation to jurisdiction and arbitration clauses included in contracts for the carriage of goods by sea in case of any cargo dispute. He takes the perspective of the shipping companies and the shipowners, as these are the driving forces of the shipping industry due to their strategic importance.

The book provides an analysis of the existing law on the recognition and validity of jurisdiction and arbitration clauses in the contracts for the carriage of goods by sea.

Dr Echebarria Fernández seeks to provide conclusions and to learn lessons for the future of the non-recognition and the non-enforcement of the clauses in the existing fragmented legal framework at an international, European Union, and national level (England & Wales and Spain).

The interface between the different legal regimes reveals the lack of international harmonisation and the existence of 'forum shopping' when a cargo interest sues the shipowner or the party to whom the shipowner charters the vessel.

Dr Echebarria Fernández also leads the Legal challenges faced by coastal and fishing communities and the new British Fisheries Policy Project, funded by the City Law School’s Higher Education Innovation Fund (HEIF). Experts in Fisheries Law, EU Law, Law of the Sea, and Maritime & Commercial Law, are encouraged to approach him regarding any possible contribution to the online Workshop on the topic, to be organised by mid-June. The outcome of the Project and the lessons learnt from the Workshop will be published as an open access book by the end of 2021.