This is the longest running lecture series at City, University of London, with this year’s lecture being the 44th. The lecture commemorates the work of Physicist F.D. Edwards, a member of staff at City, University of London’s predecessor institution, The Northampton Institute, and Past Master of the Worshipful Company of Scientific Instrument Makers. In 1919 he founded the Edwards, a leading vacuum engineering company headquartered in the UK. 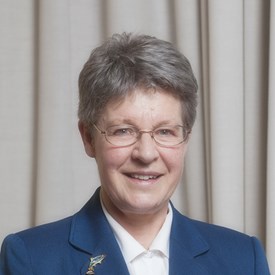 What is THAT? The discovery of pulsars, their nature and their impact on physics

In this talk I will describe the accidental discovery of pulsars (pulsating radio stars), describe these amazing objects and show how they are being used to advance our understanding of physics.

Professor Dame Jocelyn Bell Burnell will give this year’s 44th Edwards Lecture. She is an astrophysicist who was responsible for the discovery of pulsars while a radio astronomy graduate student in Cambridge and has subsequently worked in gamma ray, X-ray, infrared and millimetre wavelength astronomy. She was credited with one of the most significant scientific achievements of the 20th century.

Professor Bell Burnell is currently a Visiting Professor of Astrophysics at the University of Oxford, and a Fellow of its Mansfield College. A member of 7 Academies worldwide, she was the first female President of the Royal Society of Edinburgh as well as of the Institute of Physics. She also served as President of the Royal Astronomical Society. She is currently Chancellor of the University of Dundee and was previously a Pro Vice Chancellor of Trinity College Dublin. She was awarded the Michael Faraday Prize (2010) and Royal Medal (2015) by the Royal Society for her pivotal work on pulsars. She holds major awards from French, Spanish and US bodies and numerous Honorary Doctorates.

Professor Bell Burnell has spent her career working to help women and minorities in science. In 2018, she was awarded the Special Breakthrough Prize in Fundamental Physics, worth three million dollars (£2.3 million), for her discovery of radio pulsars. She very generously donated all of the money "to fund women, underrepresented ethnic minority and refugee students to become physics researchers" under the ‘Bell Burnell Graduate Scholarship Fund’ administered by the Institute of Physics.