Please note this event has been rearranged to the 17th February 2021. Physical or online location TBC closer to the date.

The 1939 New York World’s Fair showcased ‘The World of Tomorrow’. Visitors marvelled at futuristic technologies, from televisions to fluorescent lightbulbs. Charting the American railroad’s 110-year history, however, the spectacular stage production Railroads on Parade (music by Kurt Weill) revealed that the Fair’s teleological futurism depended upon a deeply ideological and racially curated construction of the past.

With 20 operational railroad cars traversing the stage, a 250-strong company, and around three million spectators throughout the 1939 and 1940 seasons, Railroads was vast. Coupled to the show’s technological and infrastructural progress narrative was a social one, resolving in U.S. unification: ‘Can America ever again be rended apart? […] This is the […] end of isolation and sectionalism.’

Building on interdisciplinary theorization of ‘sociotechnical imaginaries’ (Jasanoff and Kim), I argue Railroads allows us to explore how the white communal identities integral to US liberalism are channelled between past and future, and where music, technology, and mass spectacle intersect. This paper capitalizes on intensifying scholarly interest in Railroads, including current work by Naomi Graber, Erica Scheinberg, and bruce mcclung, following the 2008 rediscovery of its long-lost original recording. 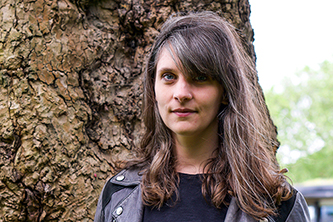 Emily MacGregor is a British Academy Postdoctoral Fellow in Music at King’s College, London. Previously, she held a Marie Curie Global Fellowship at Harvard (2016-18) and subsequently at Royal Holloway (2019), after completing her DPhil in Music at Oxford University in 2016. Her research focuses on the music and cultural history of Germany and North America in the first half of the twentieth century.

She is currently completing a monograph titled The Symphony in 1933, while also embarking on a new research project at King’s exploring music, technology, and the experience of exile and diaspora in New York from 1930 to 1945. She has articles published in The Musial Quarterly, Critical Quarterly and Journal of Musicological Research, and in 2019 was awarded the Royal Musical Association’s Jerome Roche Prize for a distinguished article by a scholar at an early stage of their career.