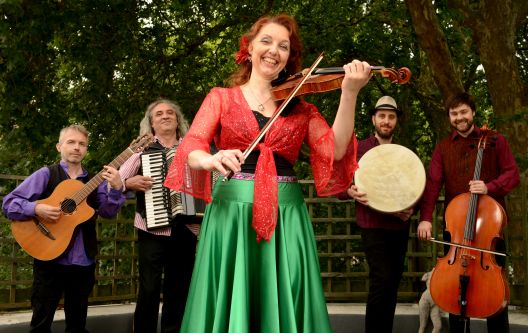 Hear arrangements and compositions inspired by Balkan Romani Music, played by the energetic band Tatcho Drom, who specialise in the performance of Eastern European and Balkan music. Led by violinist, singer and ethnomusicologist Gundula Gruen, the group performs songs and music that Gundula discovered and studied during her numerous field trips through Hungary, Romania, Serbia, Macedonia and beyond. This concert will feature several of Gundula’s own works, capturing the stories and experiences of her travels, including One Day in Grunistan, a "micro-symphony" for the band, as well as Bengeskri Kani ("The Devil’s Fart") and other smaller pieces.

Gundula Gruen is a virtuoso violinist and singer who has extensively travelled through Eastern Europe and the Balkans, researching and studying music, transcribing melodies that she learned first-hand from Romani musicians. Described by Songlines magazine as "a shining star in the UK’s Balkan music scene", her unique performance style showcases a technical ability acquired through intensive conservatoire training as well as a colourful and charismatic personality. Her arrangements and compositions, whilst drawing influence from her love and extensive knowledge of Romani Gypsy music, are original and highly personal.