This event is now cancelled: apologies for any disappointment and inconvenience caused.

Called 'inventive' by the New York Times and a 'formidable new-music force' by TimeOut NY, loadbang has built a reputation for championing music by some of the United States' leading composers and new voices. 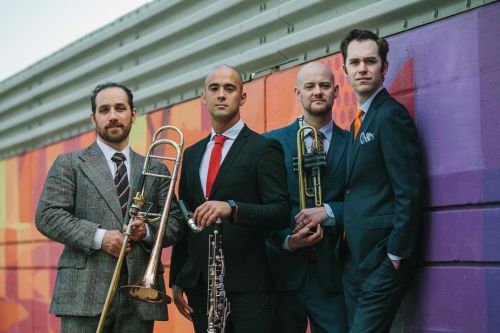 Since their founding in 2008, their unique lung-powered instrumentation has provoked diverse responses from composers, resulting in a repertoire comprising an inclusive picture of composition today. In New York City, they have been recently presented by and performed at  Miller Theater, Symphony Space, MATA and the Look and Listen Festival; on American tours at Da Camera of Houston, Rothko Chapel, and the Festival of New American Music at Sacramento State University; and internationally at Ostrava Days (Czech Republic), China-ASEAN Music Week (China) and Shanghai Symphony Hall (China). loadbang has premiered more than 300 works, written by members of the ensemble, emerging artists, and today's leading composers.

Their repertoire includes works by Pulitzer Prize winners David Lang and Charles Wuorinen; Rome Prize winners Andy Akiho and Paula Matthusen; and Guggenheim Fellows Chaya Czernowin, George Lewis, and Alex Mincek. They are an ensemble-in-residence at the Charlotte New Music Festival, and through a partnership with the Longy School of Music of Bard College in Boston, they are on the performance faculty of Divergent Studio, a contemporary music festival for young performers and composers held each summer.