A performance of traditional Javanese gamelan music. The Central Javanese gamelan is a percussion orchestra consisting of tuned gongs, metallophones and drums. Pieces range from soft and delicate to powerful and stark and often accompany dance or shadow puppet theatre.

Performed by students of City, University of London’s Department of Music, directed by Andy Channing. 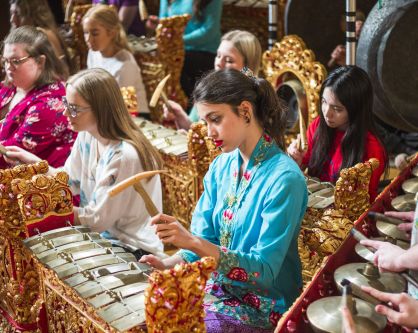 The study and performance of gamelan has been an important part of the Department of Music at City since 1990.

The Department houses several sets of instruments, including those used in the performance of Balinese, Javanese and Sundanese musical forms. Our resident ensembles include Gamelan Lila Cita and Sekar Enggal.

Our student gamelan ensembles are directed by Andy Channing, who studied gamelan at the Southbank Centre and at STSI (Indonesian Academy of Performing Arts) Surakarta, Central Java, and with various teachers in Bali. He has taught Balinese and Javanese gamelan throughout Europe, primarily at City, SOAS, the Southbank Centre and LSO St Luke’s, and has performed worldwide.