An evening with the duo of violinist Mandhira de Saram (leader of the acclaimed Ligeti Quartet) and legendary improviser Steve Beresford (piano, electronics and objects). Beresford and de Saram will perform a set of spontaneous music, drawing on their exceptionally wide range of mutual musical experiences and inspirations.

a mischievously quirky, ambient soundscape... to which de Saram responded by nudging the boundaries of violin technique... a meeting of minds 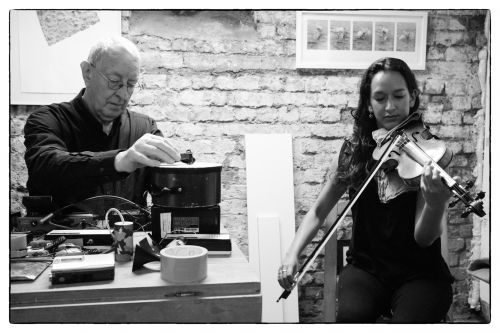 Mandhira de Saram is a founding member and leader of the Ligeti Quartet, a string quartet who specialise in contemporary music in all its many guises. She is also a busy soloist - an improviser, chamber musician and collaborator, working across a variety of genres. She has regular duos with Benoît Delbecq (with whom she recently released an album, Spinneret) and Steve Beresford, and is a member of Riot Ensemble. She has performed at prestigious venues such as the Wigmore Hall, Barbican Centre, Southbank Centre and St John’s Smith Square in London, and Carnegie Hall in New York.

Mandhira is currently a mentor for the Young Music Leadership Programme in association with the Royal Academy of Music and Kuumba Youth Music. As part of three Ligeti Quartet university residencies - Sheffield, Cambridge, and Goldsmiths (London) - she regularly teaches and leads workshops. She studied at the University of Oxford graduating with an Masters degree in music. Her violin teachers have included Igor Petrushevsky, Howard Davis and Levon Chilingirian. She currently plays a 1735 Sanctus Seraphin violin kindly loaned to her by Derek Clements-Croome.

Steve Beresford has been a central figure in the British and international spontaneous music scenes for over forty years, freely improvising on the piano, electronics and other things with people like Derek Bailey, Evan Parker, Han Bennink, John Zorn and Alterations (with David Toop, Terry Day and Peter Cusack).

He has written songs, written for large and small ensembles, and scored short films, feature films, TV shows and commercials. He was part of the editorial teams of Musics and Collusion magazines, writes about music in various contexts and was a senior lecturer in music at the University of Westminster. With Blanca Regina, he is part of Unpredictable Series, which produces events and sound and video recordings of experimental music and art.

Steve has an extensive discography as performer, arranger, free-improviser, composer and producer, and was awarded a Paul Hamlyn award for composers in 2012.